Home » A slice of bread can fracture your bones 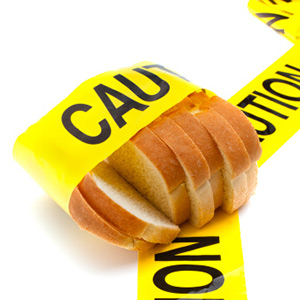 If your digestive system reacts to bread and other foods made from wheat, rye or barley (which contain gluten), your bones may be in danger. So the sooner you give up gluten the better.

People with celiac, an autoimmune sensitivity to gluten, often suffer chronic damage to their small intestine. The result of this damage, according to researchers at Karolinska University Hospital Stockholm, Sweden: a greater risk of a broken hip or other bone fractures.

Damage to the intestinal mucous membrane can interfere with calcium absorption. That process often weakens the skeletal structure.

“We believe that giving the mucous membrane — the moist tissue lining the small intestine — a chance to heal can lower the risk of complications, including bone fractures, in celiac patients,” says researcher Jonas F. Ludvigsson. “Our research confirmed that patients had a higher rate of hip fractures when tissue damage persisted over time. Sticking to a gluten-free diet is crucial for minimizing tissue damage and reducing the risk of a serious fracture that could cause other complications.”

In this research, more than 7,000 people with celiac were tracked for about a decade after being diagnosed with celiac. The scientists found that those with persistent tissue damage were more likely to break a hip. All of the people in the study faced a similar risk close to the time of the follow-up biopsy (an examination of the intestinal lining). The group with persistent tissue damage had a heightened risk of hip fracture beginning five years after the follow-up biopsy, indicating a higher long-term risk.