Home » Are you sitting on a life-threatening tumor? 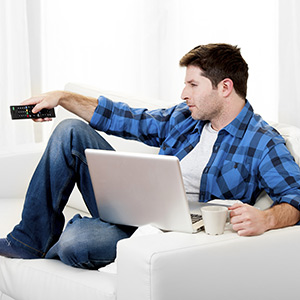 More than 1,000 people a week in the U.S. die from colorectal cancer. And if you’re like most Americans, you engage in one particular daily activity that may have you sitting on a potentially fatal tumor.

The bad habit is sitting down for too many hours every day.

“Sedentary behavior is emerging as a risk factor for poor health,” says researcher Christine L. Sardo Molmenti of the Department of Epidemiology at Columbia University Mailman School of Public Health in New York. “Even among those who fulfill daily recommendations for physical activity, lengthy periods of sedentary behavior have been associated with early morbidity and mortality, leading to the ‘active couch potato’ paradigm.”

Molmenti’s study looked at the health of about 1,700 men who had had one or more colorectal adenomas removed during a colonoscopy. The research demonstrated a 45 percent increase in colorectal adenoma recurrence for men who spent the most time sitting down during the day.

“We believe it would be beneficial to see ‘reduce prolonged sitting time’ added to the list of public health recommendations currently in place for health promotion and disease prevention,” says Molmenti.

The men with the greatest risk spent more than 11 hours a day on a couch or in a chair.