Home » Artificial sweeteners not for health 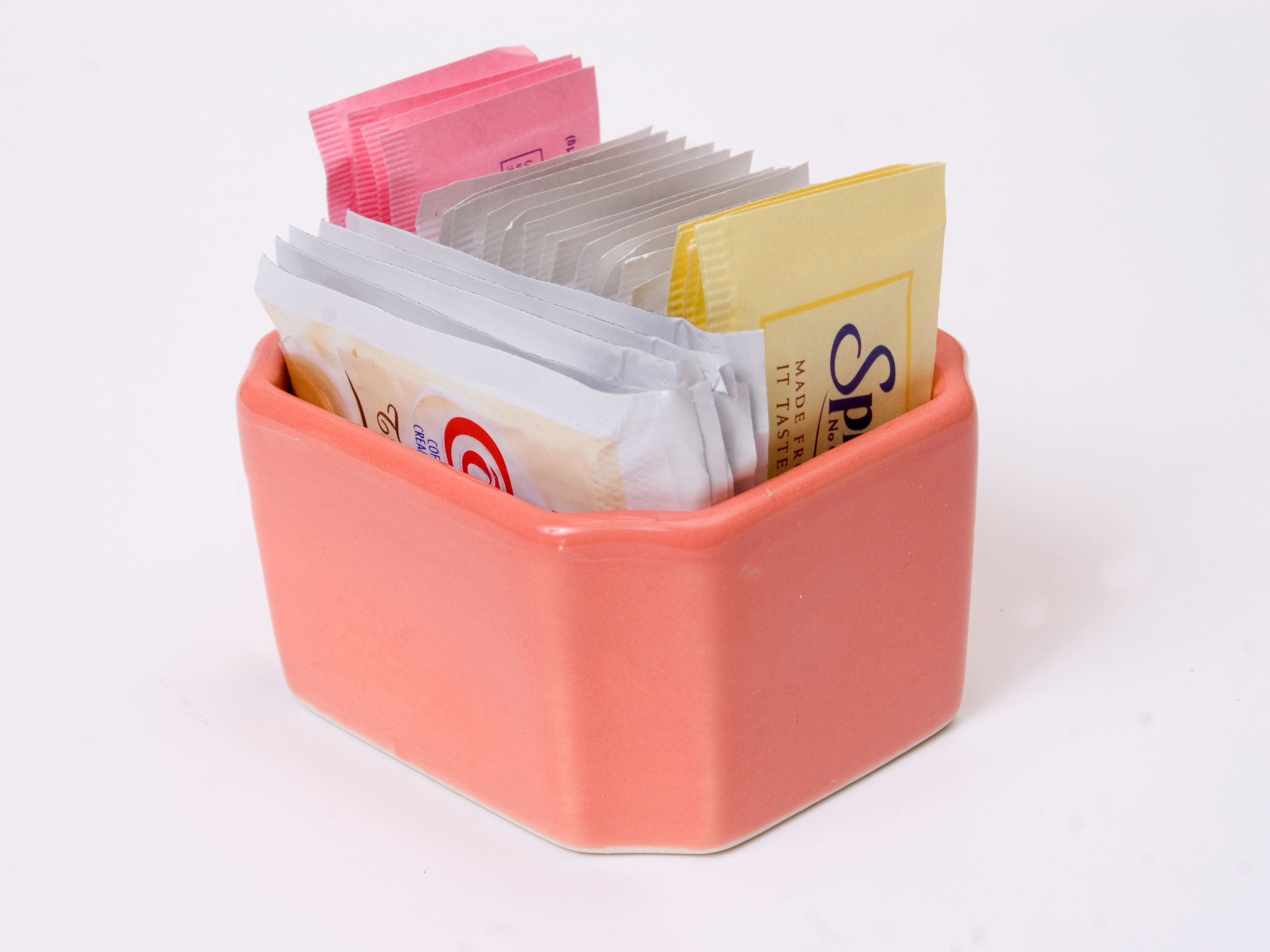 You see artificial sweeteners in many commercially produced foods. They are what give “diet” sodas that sweet zero-calorie taste. But do they really help you lose weight?

Last week in my article, “Sweetness for sickness or health,” I gave you my criteria to evaluate sweeteners. Then I showed you the many adverse health effects of sucrose (i.e. table sugar). Equally problematic are the artificial sweeteners, even though these are recommended for diabetic patients by the American Diabetic Association. [1]

These chemical compounds are 30 to 7,000 times sweeter than sugar. Although they have zero calories—they come with other adverse health effects you deserve to know about, including an increased risk for obesity, diabetes, heart disease and more.

Several large prospective cohort studies found artificial sweetener consumption to correlate with weight gain—not loss. Saccharin use over eight years among 31,940 women was associated with weight gain in the Nurses’ Health Study beginning in the 1970s. [3] An eight-year study in the 1980s among 3,682 adults showed a consistently increased body mass index (BMI) among drinkers of diet sodas compared to controls [4] (+1.01 kg/m2 for controls and 1.78 kg/m2 for diet soda consumption in the highest quartile). In the early 1980s, the American Cancer Society study of 78,694 women found that at even a one-year of follow-up, the diet soda drinkers (similar in age, ethnicity, socioeconomic status, and preexisting conditions) gained weight compared to non-users matched by initial weight). [5] Nonetheless, in May 2014 “industry-independent” researchers did a meta-analysis [6] review of 15 randomized controlled trials and nine prospective observational cohort studies that claimed there is no weight gain effect from artificial sweeteners. Hmmm…

Moreover, there have been studies that suggest that artificial sweetener consumption contributes not only to increase body weight, but to increased diabetes rates as well. The American Diabetes Association warns diabetics not to consume sugary drinks, but then recommends diet drinks sweetened by artificial chemical sweeteners. Recently a seven-year study of more than 2,000 Japanese men clearly showed that diet soda drinkers had a significantly higher incidence of diabetes compared to controls, as reported in the Feb 2014 European Journal of Nutrition. [7]

Another study [8] recently reported by French researchers followed 66,188 women for 14 years and found that even at equal consumption rates, the diet soda drinkers had more new cases of diabetes compared to regular soda drinkers—15 percent greater risk at half a liter per week and 59 percent greater risk for 1.5 liters per week, respectively, for developing diabetes. They postulated this effect to be largely due to the non-nutritive calories and the increased sweet craving effect of artificial sweeteners in diet soda. These researchers also looked at the effects of 100 percent natural squeezed fruit juice consumption and found no association with a risk of diabetes.

Other research suggests that artificial sweeteners contribute to increased rates of diabetes by disrupting the balance of healthy gut microbes.

What about for those of us who are not diabetic or overweight? The most common growing chronic health problem in America is metabolic syndrome (pre-diabetes). Metabolic syndrome is the combination of risk factors for heart disease and diabetes such elevated abdominal fat, cholesterol, blood sugar and blood pressure.

Approximately one in four American adults now have metabolic syndrome (pre-diabetes). In a study reported in 2009, researchers found an increased rate of metabolic syndrome among higher consumers of diet soda (as an independent variable) and those eating two or more servings a day of red meat compared to lower consumers.

Other health risks of artificial sweeteners

You may know that Saccharin (Sweet-n- Low) was the first artificial sweetener and was almost banned in 1977 by the U.S. Food and Drug Administration (FDA) because it caused bladder, uterus, ovary and skin cancers in animals. It was kept it on the market but with this warning label: “Use of this product may be hazardous to your health. This product contains saccharin, which has been determined to cause cancer in laboratory animals.” Yet in the late 1990s it was removed because the cancer was only in male rats who have a particular predisposition for these cancers—not people. Despite the claim that there is “no evidence that saccharin causes cancer in humans,” if you know how money drives politics, I am still suspicious. How about you?

Aspartame (NutraSweet, Equal) is the most prevalent artificial sweetener and is also fraught with health risks. I am not referring to its rare contraindication for people with phenylketonuria (PKU). I am talking about evidence from a study [9] presented March 29, 2014 at the ACC Annual Scientific Session in Washington, D.C., [10] confirming that drinking diet soda sweetened with Aspartame significantly increases heart attack and heart-related death. The study, led by Ankur Vyas, M.D., of the University of Iowa, looked at data from the Women’s Health Initiative Observational Study of 59,614 participants. Postmenopausal women who consumed two or more diet drinks daily were 30 percent more likely to experience a heart attack and 50 percent more likely to die from heart disease compared to women who rarely consumed diet drinks. These women with no previous heart disease were (on average) age 62.8 years and followed for 8.7 years. They even adjusted for other cardiovascular risk factors and co-morbidities.

Add to this the evidence that Aspartame is a neurotoxin—a chemical compound created in a lab that breaks down into formaldehyde, and then oxidized into formic acid in your body. Formic acid is the main chemical weapon secreted by ants to protect themselves.

But the more convincing evidence against this artificial chemical sweetener is that according to some analysts, 75 percent of adverse reactions to food additives reported to the FDA are attributed to Aspartame. [11] These include headaches/migraines, dizziness, seizures, nausea, numbness, rashes, depression, irritability, insomnia, hearing loss, vision problems, loss of taste vertigo and memory loss—a total of more than 90 side effects are linked to Aspartame consumption.

Why don’t we hear about this so we can have fair warning? The following may help explain it. According to an author, in 1996 Ralph G. Walton, M.D., then chairman at the Center for Behavioral Medicine and Professor of Clinical Psychiatry at Northeastern Ohio University College of Medicine, analyzed 164 Aspartame-related studies from a Medline search. He found 74 Aspartame industry-sponsored studies and 90 independent (no industry money) studies. Of the 90 independent studies, 83 (92 percent) identified one or more problems with Aspartame—and of the seven studies which did not find a problem, six were conducted by the FDA. The problem comes when you consider that a number of FDA officials soon after went to work for the Aspartame industry even these six studies could be in question. And of the 74 Aspartame industry-sponsored studies, all 74 (100 percent) not surprisingly found no problems with Aspartame. [12]

Sucralose (Splenda) is being touted as the newer, safer artificial sweetener—the FDA points to more than a hundred studies showing it is safe to use and that the rat studies are not significant. We suspect Sucralose contributes to tooth decay. We do know that it adversely alters gut microflora in rats. [13] Also, at high doses Sucralose is toxic to the liver and kidneys, and shrinks thymus glands in rats.

Even though there are no human studies to prove Sucralose is dangerous, there are also no long-term human studies to prove it is safe—not even one independent study of Sucralose lasting more than six months was done in the first 11 years it was on the market, the largest being 128 people studied for only three months. [14] Side effects can be dismissed as a simple “allergy” to Sucralose, which are being collected by the Sucralose Toxicity Information Center. These include skin rashes, panic/agitation, dizziness, headaches, numbness, muscle aches, diarrhea, intestinal cramps and swelling. Sound familiar? I’ll let you decide.

And when you learn in my next article about healthier sweeteners, it should not be very difficult to do so.

To feeling good without artificial sweeteners,