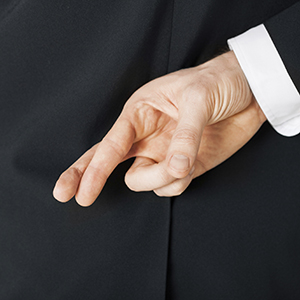 Honesty is not a constant character trait. Research at Harvard indicates that you and your fellow humans are more honest during one part of the day and more likely to cheat and lie at another time. If you need an honest answer to an important question, ask during the honesty hours.

These studies find that we’re more honest in the morning. But as the day wears on, honesty wears off and dishonesty increases.

In these lab experiments, lying, cheating and engaging in unethical behavior took place more often after lunch than right after breakfast.

The series of experiments showed a similar pattern of results throughout the U.S. Study subjects were more likely to send dishonest messages to virtual partners or to report answering an insoluble number-matching problem in the afternoon than in the morning.

The researchers conclude: “…organizations may need to be more vigilant about combating the unethical behavior of customers or employees in the afternoon than in the morning. Whether you are personally trying to manage your own temptations, or you are a parent, teacher, or leader worried about the unethical behavior of others, our research suggests that it can be important to take something as seemingly mundane as the time of day into account.”