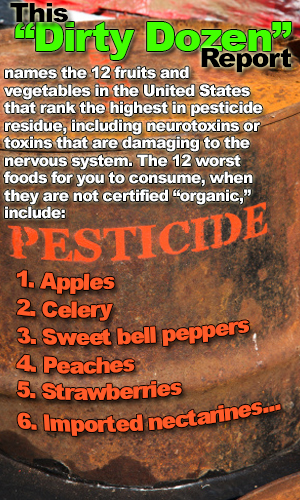 If you’re not eating organic food, you may be ingesting a surprisingly large amount of toxins. Pesticide residues, antibiotics and genetically modified (GMO) foods are among the questionable elements that are in our food supply. Protect yourself by knowing which foods are the most problematic and may be the riskiest.

As the debate over what constitutes good health continues, the cost of healthy food keeps increasing. And while many people believe they are eating a healthy diet full of nutrients from fresh fruits and vegetables and whole grains, they are actually eating GMO foods that are covered in pesticides. Washing food before preparation removes chemicals from the outside of it; but many of these substances wash off in rain while fruits and vegetables are still growing, get absorbed into the soil and are made a systemic part of the foods themselves so that no amount of washing can remove them. Yet while the advertising claims about conventional foods as “healthy” and “all natural” are scams, many people find the cost of organic food puts it financially out of reach. They can’t afford daily helpings of organic foods.

Two years ago, I wrote an article about a study published in the American Journal of Clinical Nutrition. For this study, researchers form the London School of Hygiene & Tropical Medicine conducted a review of more than 160 scientific papers and studies published in the leading journals over the past 50 years. The results of the largest study suggested “no evidence of differences in nutrition-related health outcomes that result from exposure to organic or conventionally produced foodstuffs.”

I was outraged at what this study suggested, because it missed the main health point completely. To read my article on this, click here.

The good news is that my assessment of those study results is supported by a recently released report by the Environmental Working Group (EWG), which assesses the health hazard of the chemicals used to grow non-organic food. This “Dirty Dozen” report names the 12 fruits and vegetables in the United States that rank the highest in pesticide residue. The deadly chemicals farmers used to kill bugs and insects on crops are allowed by our beloved Food and Drug Administration to be eaten by consumers. And these pesticides are neurotoxins, or toxins that are damaging to the nervous system. Remember the nervous system, that little thing that controls the entire body?

The 12 worst foods for you to consume, when they are not certified “organic,” are:

This year, the EWG added a few extra foods to the list of their dozen most harmful, because they are coming close to dangerous levels of toxins. These are:

Makes you angry, doesn’t it? All of the foods that we go out of our way to purchase from the grocery store and even the local farmers markets — unless they are specifically labeled as “organic” — are harming our bodies. It has nothing to do with nutritional levels, as the London study analyzed, but with toxic chemicals used to grow the fruits and vegetables that damage our nervous systems and lead to disease.

I used to buy locally grown strawberries and blueberries from a farm a short drive from my home, until I noticed that their packaging did not include “certified organic” on it anywhere. When I asked the farmer, he said that he cannot afford to grow organic. Although he was not lying to his customers, I’ll wager that most, like me, thought buying directly from a farm meant healthier. Not so.

I found some solace in the local Trader Joe’s and Whole Foods, whose selections I assumed were better. And they are, to an extent. Recently, Trader Joe’s own store brand of meats was listed as being raised with antibiotics and is toxic. Also, the Whole Foods’ 365 brand has both organic and “all natural,” products but Whole Foods doesn’t bother telling you that some are GMO and not organic. You have to figure it out for yourself. What a scam.

There is some light at the end of this tunnel. The EWG also released a list of non-organic foods it found to be healthier. Its “Clean 15” is a list of fruits and vegetables that show the least amount of pesticide reside. These are:

If you don’t think pesticide toxins are harmful to your body, here is what Harvard School of Public Health’s Chensheng Lu has to say: “Toxins appear to be connected to a prevalence of diseases, including cancer. And some studies suggest pesticide intake, especially in the prenatal stage, can cause neurological developmental problems in infants.”

In the end, we are talking health, not finances. If you have the resources, I suggest consuming only organic fruits and vegetables, dining on grass-fed beef that is hormone and antibiotic-free, and using oils for cooking that are non-hydrogenated and contain no trans fats. If money is an issue and you want to be as healthy as possible especially when it comes to diet, then purchase the Dirty Dozen foods only in their certified form and go ahead and purchase the Clean 15 from your local market. This mix should provide you enough protection from poison while saving your wallet in this economy.