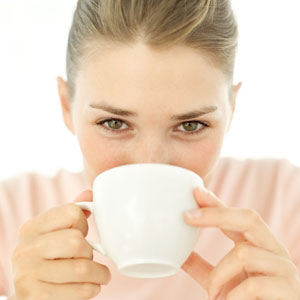 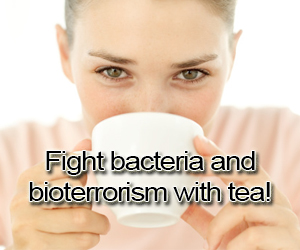 Numerous studies show that black tea has antimicrobial and detoxifying potential even at or slightly below the typical concentrations found in brewed tea. Long after tea was a British favorite, a major in the British Army Medical Corps demonstrated about 100 years ago that brewed black tea killed Salmonella typhi [1], and suggested brewed black tea fill the water bottles of British troops.

Now a British researcher has found that black tea may prove to be a valuable ally in the event of a terrorist attack because of its ability to kill microorganisms and inactivate toxins.

Dr. Simon Richardson, senior lecturer in biopharmaceutical sciences at the University of Greenwich’s School of Science, is part of a team of researchers who have discovered that a principal component of black tea can neutralize ricin, a highly toxic substance favored by bioterrorists.

According to Dr. Richardson, “One cup of char [tea] won’t cure you if you have been poisoned, but compounds extracted from tea could, with further research, provide an antidote to poisoning following a terrorist attack. I’ve been working on neutralizing ricin poisoning for about six years as a by-product of my work in drug delivery. Professor Les Baillie from Cardiff University is leading this project, which is in its preliminary stages but there is real progress! The next stage, as well as securing more funding, is seeing if other components of tea have a greater effect.”