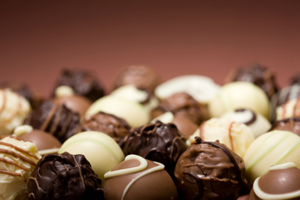 What’s the healthiest bean in the world? There’s good evidence that it’s the cocoa bean, the stuff that chocolate is made of. Research into chocolate shows that it can lower your blood pressure, reduce your chance of heart disease and stroke, energize victims of chronic fatigue, repair blood vessels in the liver, improve skin, fight dental plaque and help you think better. Those are pretty impressive benefits for a flavorful food with an alluring taste.

Only in the past decade or so have scientists taken a serious look into the health benefits of chocolate. And what they are finding has cemented chocolate’s reputation as a food with remarkable effects. The consumption of chocolate seems to have originated with the ancestors of the Mayans and the Aztecs in the Western Hemisphere thousands of years ago. Believing chocolate to be a healing food, these ancient civilizations consumed it unsweetened, sometimes mixed with hot peppers and may have incorporated it into religious ceremonies.

Today, many people consume chocolate religiously because they like the taste, not necessarily for its healing powers. But studies by the United States Department of Agriculture (USDA) show that two tablespoons of cocoa convey more antioxidant benefits than a cup of blueberries, a half glass of red wine or four cups of green tea.

According to Monica Bearden, R.D. and Shara Aaron, M.S., R.D., authors of the book Chocolate, A Healthy Passion, contrary to its reputation, chocolate (without the sugar added to it in chocolate candy) is actually good for your teeth. Research at the University of Osaka graduate School in Japan found that rinsing with a cocoa extract decreases bacteria and plaque found on teeth.

Some of the most impressive research on chocolate demonstrates that consuming dark chocolate is associated with a remarkable one-third reduction in the risk of developing heart disease. When British scientists at the University of Cambridge examined the results of seven studies that involved 114,000 participants, they discovered that “the highest levels of chocolate consumption were associated with a 37 percent reduction in cardiovascular disease and a 29 percent reduction in stroke compared with lowest levels.”1

Chocolate In The Body

Other scientists who have looked at how chocolate may help heart health have found that it boosts the body’s production of high density lipoprotein (HDL, the so-called good cholesterol). Studies show that flavanols (antioxidants) in chocolate increase the activity of proteins that interact with DNA to raise levels of HDL in the liver and intestines. This is accompanied by a decrease in low density lipoprotein (LDL, the bad cholesterol).

Furthermore, chocolate’s flavanols may protect the hearts of smokers by increasing their levels of nitric oxide. In the blood, this extra nitric oxide can offset some of the harmful blood vessel contraction linked to the free radicals fomented by tobacco smoke. “This raises the possibility that a potential new agent for the prevention and/or treatment of cardiovascular disease may emerge from additional research,” says Malte Kelm, M.D., a researcher at the Heinrich-Heine-University in Düsseldorf, Germany.

Dr. Kelm believes that further work in this area will show that chocolate may help support better blood vessel health for people with diabetes. “While more research is needed, our results demonstrate that dietary flavanols might have an important impact as part of a healthy diet in the prevention of cardiovascular complications in diabetic patients,” he predicts.

Cocoa has enjoyed a long reputation for providing extra pep. Even the Aztec Emperor Montezuma II, who ruled in the 16th century, noted that, “The divine drink… builds up resistance and fights fatigue. A cup of this precious drink [cocoa] permits man to walk for a whole day without food.” And in research on people suffering chronic fatigue syndrome (CFS), British scientists have discovered that chocolate “has a beneficial effect in improving fatigue and residual function.”2 They suggest that “This may be of benefit for subjects with CFS if included as part of a healthy diet or in a formal treatment protocol.”

If you decide to eat a healthy amount of chocolate, make sure that you consume healthy chocolate: dark chocolate that is high in cocoa solids and low in fat and sugar. Yes, in this form, chocolate has a slightly bitter taste compared to highly sweetened milk chocolate. But the health benefits are that much sweeter!