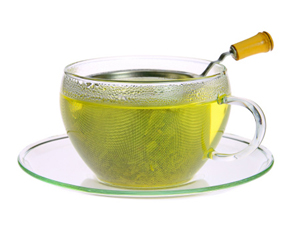 If you like to sip a cup of green tea with toast or a bagel, you’re doing your blood sugar good. Research now shows that you can avoid blood sugar spikes (and the dragged out feeling that it leaves behind) when you consume the natural chemicals in green tea with starchy foods.

“The spike in blood glucose level is about 50 percent lower than the increase in the blood glucose level of [lab animals] that were not fed EGCG,” says researcher Joshua Lambert, assistant professor of food science in agricultural sciences at Penn State University.

For humans, this may mean that green tea could help them control the typical blood sugar increases that are brought on when they eat starchy foods, like rolls or wheat cereal, that are often a part of breakfast. The starch and the tea should be consumed at the same sitting for the best effect, according to the researchers. Adding sugar to your tea could negate the benefit.

The researchers believe that EGCG controls starch-induced blood sugar spikes by inhibiting an enzyme in the pancreas which converts starch to blood sugar in the form of maltose and glucose. The green tea didn’t seem to produce the same influence for sugary foods.