Home » Drugs That Cause Low Testosterone 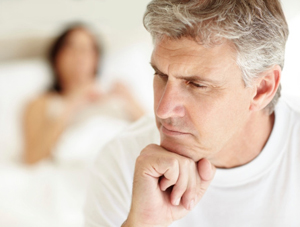 Low testosterone, commonly referred to as low T, is a phrase often tossed around by advertisers who target men worried about symptoms associated with low levels of this male hormone. While these media messages typically urge men to explore the use of testosterone products to remedy their situation, they don’t ask the question, “What is causing your low testosterone?” One answer: drugs.

Low T is one of the unintended consequences of taking some medications. The testosterone level of a healthy young male generally ranges from 300 to 800 nanograms per deciliter (ng/dl), with figures of less than 300 ng/dL generally considered to be low T (also known as hypogonadism). Symptoms of low testosterone may include a reduction in muscle mass, decline in bone density (raising osteoporosis risk), low libido, memory problems, concentration difficulties, depression, weight gain, erectile dysfunction and lack of energy. Testosterone levels naturally begin to decline gradually around age 30.

The magnitude and extent of low testosterone associated with medication use is not yet fully understood, but a new study has shed some light on at least one problematic class of drugs: the opioids.

Prior to the new research, which was conducted by Kaiser Permanente, scientists were aware opioids such as hydrocodone (Vicodin) and oxycodone (Oxycontin) could lower testosterone levels. However, what was not well understood was the difference between short-acting and long-acting opioids. Since more than 4 million Americans (it may be many more) use opioids every day to treat pain, the risk of low testosterone may be looming over the heads of a great many people.

Investigators with the Kaiser Permanente study compared use of short-acting and long-acting opioids in 81 men being treated for chronic pain for at least three months. None of the men had low testosterone before entering treatment. Three months later, however, that had changed.

Other Drugs Cause Low Testosterone

A number of other drugs and medications have been associated with low testosterone. These include:

Statins: Men who take statins to lower cholesterol may be causing their testosterone to drop as well. In a study from the University of Florence in Italy, a twofold increased prevalence of low testosterone was associated with the use of statins among men being treated for erectile dysfunction. In the study, the statins most often used were simvastatin (Zocor) or atorvastatin (Lipitor). [2]

Illicit drugs: A recent review from the University of Colorado pointed out that illicit drug use, including anabolic steroids, marijuana, cocaine and methamphetamines, are associated with low testosterone and other factors that affect male infertility. [3]

Chemotherapy: Various chemotherapy drugs can damage cells that produce testosterone. In many cases the damage is permanent, although testosterone levels may bounce back for some men. Low testosterone is reportedly a problem for 40 percent to 90 percent of men who have cancer. [4]

If you are experiencing symptoms of low testosterone, the drugs or medications you are using may be a factor. Be sure to discuss your questions and concerns about low testosterone and drug use with a knowledgeable professional.

[2]—The effect of statin therapy on testosterone levels in subjects consulting for erectile dysfunction. http://www.ncbi.nlm.nih.gov/pubmed/20141585

[3]—The insults of illicit drug use on male fertility. http://www.andrologyjournal.org/cgi/content/full/33/4/515