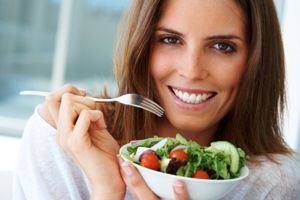 To eat the healthiest diet, you have to eat very little meat. But optimal health comes not just from minimizing the meat in your meals; you also have to maximize your consumption of nutrient-rich raw foods.

When I talk about a healthy lifestyle, I am first referring to a diet consisting of mostly whole foods, with half or more of all that you eat in the form of raw foods. From my experience with patients, this is more influential on long-term health than other lifestyle choices such as exercising regularly, drinking only minimal alcohol and not smoking.

This research not only shows that a healthy lifestyle can substantially reduce your risk of coronary heart disease, but that the preventive benefits of this lifestyle exceeds what can be achieved with prescription drugs and invasive medical procedures.

In relationship to health, not all fats are created equal. The scientific literature shows that dietary saturated fat increases your risk for cardiovascular disease. A 2010 report by the Harvard School of Public Health revealed conclusive evidence that you can reduce your heart disease risk by 19 percent when you replace saturated fat with polyunsaturated fat. Furthermore, this meta-analysis of eight randomized trials demonstrated that every 5 percent increase in dietary polyunsaturated fat drops your chances of heart disease by 10 percent.2 For this discussion, I’ll include omega-3 and omega-6 fatty acids in the polyunsaturated fat category.

Fortunately, all the large authoritative agencies agree that we should reduce our saturated fat intake. For example, in 2004 the Centers for Disease Control and Prevention (CDC) stated that "Americans need to continue working to reduce saturated fat intake…"3 Likewise, in 2006 the American Heart Association recommended less than 7 percent of total calorie consumption be from saturated fat.4 5 And in 2003 the World Health Organization (WHO) and Food and Agriculture Organization (FAO) recommended that we restrict saturated fatty acid intake to less than 10 percent of daily calorie consumption — and less than 7 percent for high-risk groups of people who already suffer chronic disease.6

For me, it would be confusing to have to count all the fat calories from each food I eat every day and consult tables and graphs to determine how much is from saturated fat for each food. This sounds like it would be an overwhelming task. Luckily, I don’t think you have to stringently calculate your calories from each fatty food you eat.  More important is to look at all the health characteristics of the foods on your plate and focus your diet on the healthiest items.

That’s where the complications start. This list contains foods with important micronutrients known to reduce disease risk. Dark chocolate possesses antioxidants that lard certainly omits. Salmon is high in omega-3 (polyunsaturated) oils and is proven to be heart protective as much as or more so than statin drugs (which are used to treat high blood cholesterol).

Coconut is so high in fiber (75 percent of its total carbohydrate content) and micronutrients that you can lose weight and gain health from eating coconut. Plus, even though cashews are rich in saturated fat, these tree nuts have been proven to reduce heart disease when consumed consistently over time.

Nuts, in general, are examples of highly saturated fatty foods that are healthy. In 1998, a study in the British Medical Journal showed that nut consumption can lower diabetes risk in women by 36 percent.7 This data was taken from the Nurse’s Health Study, and included 86,016 women ages 34 to 59 with no prior heart disease, stroke or cancer who were followed for nearly 18 years.

Another impressive recommendation for nut consumption derives from a 2002 Archives of Internal Medicine report that concludes nuts nearly cut in half the rate of sudden deaths by heart disease. These researchers observed 21,454 men for 17 years as part of the U.S. Physicians’ Health Study.8

Furthermore, in 2009, research appearing in the Journal of Nutrition showed that nut consumption lowers the heart attack rate of women with diabetes by 44 percent.9 There were 6,309 women with type 2 diabetes who were followed in this study beginning in 1980 for a total of 54,656 person-years of follow-up.

Moreover, the authors of a 1998 study reported in the Journal of the American College of Nutrition took a look at the effects of three diets, one that provided fat from almonds, another from olive oil and a third whose fat came from butter and cheese. They found that nut consumption significantly reduced blood indicators of heart disease risk including total cholesterol and the ratio of low-density lipoprotein to total cholesterol.

But this research did not find any significant reduction of these indicators with olive oil. The folks in the group eating butter and cheese experienced significant increases in these values (worsened from baseline).10 Body weight did not change significantly in any of the people in the four-week-long study.

My point is that the total micronutrient content of food means more to health than the saturated or polyunsaturated fatty food content. That is why I love to teach my patients about relative micronutrient concentration of foods and how Mother Nature seems to provide the best foods for our health in the form of fresh produce.

In my next report I’ll take a closer look at other foods reported in the December 2010 Cardiology Research and Practice research.

To your conscious food choices,