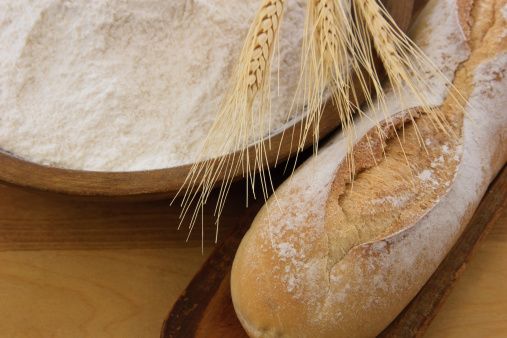 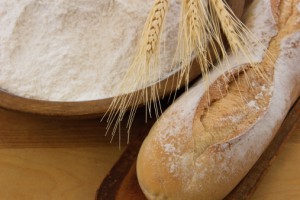 You’ve certainly heard about health problems from the proteins in wheat known as gluten. There’s more to learn about gluten than what the typical physician knows. Moreover, gluten adversely affects most all of us to a much larger extent than even I thought possible before learning this new information. I highly recommend this article to everyone who consumes wheat products. (That’s just about all of us.)

What Exactly Is Gluten?

Gluten is a group of proteins found in wheat, barley, rye, spelt, kamut and triticale that gives stickiness and elasticity to bread dough and allows it to rise when acted on by yeast. It has a gliadin portion and a glutenin portion. This type of gluten is not found in corn or rice (though some researchers believe a different form of gluten that has other effects is in those foods). Oats are often contaminated with wheat gluten.

Many foods besides white and whole grain bread are made from wheat and the other grains containing gluten.

Clearly, the gluten protein found in wheat, barley, rye, spelt, kamut and triticale is not safe for people with celiac disease. Celiac disease affects about 1 percent of Americans of all ages, and it has made it into the spotlight for wheat-related illnesses. It is a classic autoimmune reaction to gluten. It often causes destruction of the intestinal lining and frequently leads to malabsorption, fatigue and a variation of bowel symptoms, including pain, bloating, diarrhea, lactose intolerance and irritable bowel syndrome. Its prevalence is much higher in patients with certain other chronic illnesses: 1 percent to 19 percent in patients with type 1 diabetes mellitus, 2 percent to 5 percent in autoimmune thyroid disorders and 3 percent to 7 percent in primary biliary cirrhosis in prospective studies. This suggests that autoimmune inflammation occurring in the intestinal tract could very well contribute to inflammation in other organs.

Health problems from gluten are much more prevalent than just celiac disease. There are also those without gliadin antibodies who don’t fit the diagnosis of celiac disease but who are “sensitive” or “intolerant” to gluten protein, estimated to be about 15 percent of Americans. Symptoms of gluten intolerance are characterized much like celiac disease and are directly or indirectly related to consuming foods made from wheat, barley, rye, spelt, kamut, triticale and sometimes oats.

Gluten intolerance can cause:

The Hidden Problems With Gluten: A Real Cause Of Chronic Illness

It is true that gluten sensitivity is closely related to celiac disease and irritable bowel syndrome. Not only is celiac disease underdiagnosed and being found in asymptomatic patients with increasing frequency, it is also estimated that 40 percent to 50 percent of gluten-sensitive patients have the IgA anti-gliadin antibodies of celiac disease.

Therefore, recent reviews are pointing to the increasing immunological similarity of celiac disease and gluten sensitivity.

In fact, researchers are finding that gluten is responsible for destruction of the tight junctions of the small intestinal lining. When the tight junction is weakened, a condition known as “leaky gut” occurs, allowing leakage of food proteins into the body and triggering autoimmune inflammation of various types.

Consider this: When wheat germ agglutinin (the lectin protein in wheat) is isolated and 1mg is given daily to laboratory rats, it induces a condition like celiac disease, actually destroying the intestinal lining’s tight cell junctions.

Can wheat do this in humans too? Well, consider that humans (who eat wheat products) get 10-20 mg of wheat germ agglutinin in an average day; that is clearly enough to wear down this important intestinal lining. That is to say, wheat could very well be a major cause for chronic inflammatory conditions that are immune-system mediated. Until recently, the U.S. Department of Agriculture recommended about 60 percent of food be consumed from “healthy whole grains.” About 90 percent of all grains consumed in the United States are from wheat.

Because gluten is clearly a cause for leaky gut and autoimmune inflammation, we can say that gluten is a cause of chronic illness. We should also add the following list to the problems that gluten contributes to:

Gluten Revs Up Your Appetite

If you thought that this discussion was only for those people with sensitivity to gluten, I must now warn you of a few more health problems you should be aware of our modern wheat. Wheat bread has a very high glycemic index, which is not good for a diabetic-prone person or for those of you who struggle keeping off extra weight. Wheat bread can also enhance your appetite. This effect is clearly presented by William Davis, M.D., on YouTube. Be sure to watch his entire 45-minute presentation, and you’ll understand my passion for writing this article. Watch it here.

To feeling good (somehow, without bread!),

From “Wheat: the Unhealthy whole grain” a presentation by cardiologist, William Davis, M.D. on YouTube at:  https://www.youtube.com/watch?v=UbBURnqYVzw