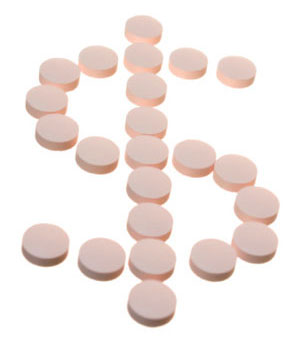 Pharmaceutical companies persuade the public to buy antacids for what their advertising calls “over-acid stomach.”

There has never been an over-acid stomach with natural acid. All the “heartburn” and “acid indigestion” symptoms are created because of low stomach acid, which causes incomplete digestion.

Incomplete digestion allows fermentation to take place. That produces the organic acids of fermentation resulting in gas and reflux. The body makes only one acid: hydrochloric acid with pepsin. Other acids that produce symptoms of acid reflux come from the fermentation process; they are entirely different from the natural stomach acid that originates in the stomach.

We are suppressing the all-important digestive process with antacids. The only solution is to build stomach acid with betaine hydrochloride by supplement with each meal. (Ask your doctor to test your stomach-acid level.)

Just how important is it to have sufficient natural hydrochloric stomach acid? The answer is something no doctor will ever tell you because most don’t know.

Adequate hydrochloric acid in the stomach or induced into the tissues by mouth, vein or muscle acts chiefly in clearing out the poisonous waste acids created by insufficient digestion and fermentation.

Hydrochloric stomach acid increases the elimination of carbon dioxide (CO2), decreases to normal the pH reaction and desensitizes the tissues to disease proteins.

Natural stomach hydrochloric acid stimulates phagocytes. Its presence is essential to all glandular and cellular activity.

Hydrochloric acid (HCl) intravenously injected will significantly raise the oxygen content of the blood. HCl stimulates all the forces of resistance.

Antacids compound the destruction of natural stomach HCl, making way for a septic process of the tissues and organs. Pyorrhea, symptoms of indigestion, nephritis, appendicitis, abscesses, pneumonia, etc., begin to appear. Deficiency of normal acid leads to stagnation of organs like the gall bladder and the pancreas, causing diabetes and gallstones, and leads the way to all forms of degenerative disease.

Normal HCl is nature’s true antiseptic, which is clearly demonstrated in the difference between HCl in a dog and a man. Normal gastric juice is far stronger in dogs. Unlike humans, a healthy dog can eat septic meat and if its stomach is opened 30 minutes later, the foul, odorous meat will be found sterile. This shows the power of HCl in the process of digestion and health.

With sufficient and normal HCl, all waste acids along with fermentation disappear. It follows that all “heartburn” and gastritis are symptoms of low HCl, not high acid as the pharmaceutical sales pitches claim.

When antacids are taken, the contents of the stomach become alkaline. This masks the symptoms of the fermentation process but at the same time the putrefactive processes are present in the stomach. Excess alkalinity promotes putrefaction and tends to diminish HCl. HCl deficiency is a large factor in the etiology of degenerative disease.

The crime of alkalizing the stomach runs deeper. The epidemic of cancer may be directly related. But the antacid people have a ruse called confusion of cause and effect. This is only one more example of the system, which we call benevolent totalitarianism, manipulating the people against their best interest with sales propaganda.

Now they have a new “health” campaign to take salt out of our diet. This further diminishes the antiseptic value of the chlorine in salt for the process of normal digestion.

Dr. David Brownstein says in his book Salt, Your Way To Health: “It is impossible to have an optimal functioning immune system when there is a salt-deficient state present… a low-salt diet has been associated with a greater than 400 percent increase in risk of myocardial infarction (heart attack) in men.”

Think how chemically close ocean salt water is to human blood. Both strive for stasis. The ocean is always clean no matter how many animals, etc., die within it. This is due to its chlorine content from sodium chloride and also to the chlorides of magnesium, calcium and other minerals. The chlorine is invaluable to health and longevity to human and sea life.

When I go to the ocean, I always bring back 2 gallons of sea water. I take at least 1 tablespoon per day. I learned this from Dr. Royal Lee’s lectures.

Mild cases of “heartburn” can also be aided by a daily regimen of apple cider vinegar, which stimulates natural production of HCl in the stomach. Take 1 tablespoon in 8 ounces of water. Honey can be added to help make the taste more palatable.