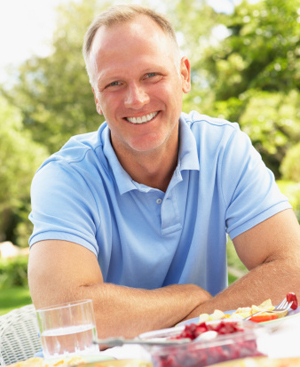 Curcumin has many benefits for men’s health, particularly in helping men with the very painful condition of prostatitis and inhibiting tumor growth in prostate cancer. Curcumin is one of the potent antioxidant and anti-inflammatory active ingredients in turmeric, a spice that is part of the ginger family. Even though people may use the names “turmeric” and “curcumin” interchangeably, these are not exactly the same thing. Turmeric has curcumin and other phytochemicals in it. Curcumin is what gives turmeric its peppery, bitter taste and it is what gives curry its flavorful kick. You’ll see why turmeric and curcumin are on the lists for the best foods for prostate health.

Chinese and Indian medicine practices have used turmeric for a long time as a treatment for colds and asthma and other inflammatory health issues. Curcumin is one of the common components of their diet as well. Recent studies have included focusing specifically on how curcumin can fight prostate cancer.

Scientists at Rutgers observed that prostate cancer rates in India are very low compared to the U.S. They hypothesized that a diet rich in plant-based foods and phytochemicals such as curcumin and other substances found in turmeric were contributing to the low rate of prostate cancer in Indian men. They injected prostate cancer cells with turmeric and a phytonutrient (phenethyl isothiocyanate) from cruciferous vegetables. When these were combined they reduced well-established tumors significantly.

In a different experiment, researchers studied mice with prostate cancer resistant to hormone therapy. One group was given curcumin and the other group was given a placebo. The mice that received the curcumin had significant reductions in tumor growth and size.

Cucumin health benefits are particularly useful in helping patients with prostatitis. In fact, curcumin is useful for both bacterial types of prostatitis and the much more common chronic nonbacterial prostatitis/chronic pelvic pain syndrome (CP/CPPS) that makes up about 95 percent of prostatitis cases.

According to a study published in the International Journal of Antimicrobial Agents, when researchers gave a combination of an antibiotic and supplements such as curcumin, quercetin, saw palmetto and stinging nettle to men with bacterial prostatitis, they experienced significant resolution of their symptoms. Please note that quercetin may decrease the effectiveness of some antibiotics such as fluoroquinolones (including Cipro) and that you should always consult with your doctor before starting any new therapies.

Studies show that curcumin can help to regulate the body’s normal response to inflammatory processes. That is why many published studies show curcumin to be effective in managing pelvic discomfort associated with CP/CPPS. Researchers believe that curcumin is beneficial to CP/CPPS sufferers because it reduces inflammation. This form of prostatitis is very difficult to treat and is frustrating for doctors and patients alike. Natural therapies such as curcumin are often more helpful and are desirable because they have much fewer side effects than conventional treatment with anti-inflammatory drugs and other commonly prescribed drugs.

How Much Curcumin Should You Take?

The suggested dose of standardized curcumin powder is 400 to 600 mg three times daily. It is difficult to absorb curcumin into the body’s cells and a modified form called Meriva is a much more bioavailable type of curcumin. Sustained-release Meriva can be taken twice a day at dosages of 100mg to 160mg. One of the best prostate supplements, Prost-P10x, contains 160 mg of Meriva curcumin phytosome in its formulation. The maker of Prost-P10x, Prostate Research Labs, uses Meriva because it has been shown to result in an up to 20-fold improvement in bioavailability compared to the standard 95 percent turmeric extracts. This prostate supplement also contains other phytonutrients that are known to work well with curcumin to support normal prostate health and reduce inflammation.

Curcumin is generally considered safe if you take the recommended doses, but if you take a larger dose for a significant amount of time, it could cause stomach upset or ulcers. Talk to your healthcare provider before taking curcumin if you have diabetes; it can lower your blood sugar levels.