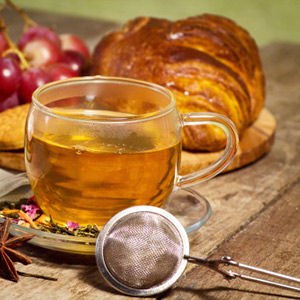 The answer these scientists came up with: Drink green tea with a starchy food.

An enzyme called alpha-amylase made in the mouth and by the pancreas helps break down starch into maltose and glucose. EGCG may inhibit the enzymes ability to break down the starch, the researchers believe, since they also found that EGCG reduced the activity of alpha amylase in the pancreas by 34 percent.

But leave the sugar out of your green tea: “That may mean that if you add sugar into your green tea, that might negate the effect that the green tea will have on limiting the rise in blood glucose level,” Lambert warns.

Lambert added that the green tea and the starch would need to be consumed at the same time. For example, drinking a cup of tea well after eating a piece of toast would probably not change the blood sugar spike.