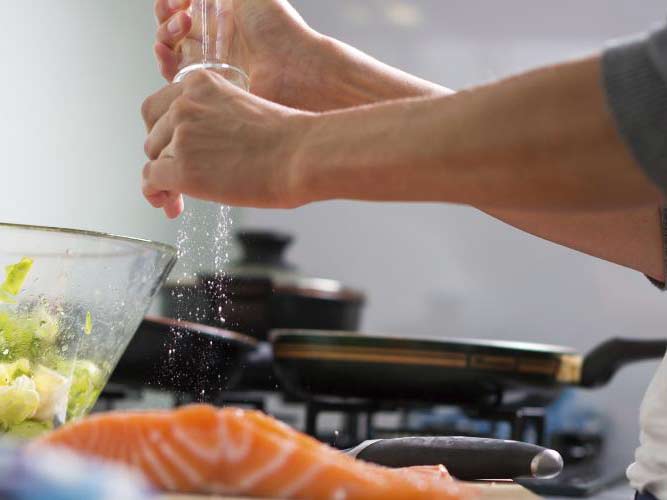 I know people who will all but come to blows over salt and refuse to eat any food in which salt is added if they know it beforehand.

But according to respected integrative medicine specialist W.C. Douglass, M.D., a low-salt diet is deadly. He reported in his May 27, 2011 newsletter “Daily Dose” that “one study found that seniors with the lowest salt consumption had the highest risk of bone breaks and early death.”

In the book “Salt Your Way to Health,” David Brownstein, M.D., states: “Researchers studied the relationship between a low-sodium diet and cardiovascular mortality. Nearly 3,000 hypertensive subjects were studied. The result of this study was that there was a 430% increase in (heart attack) in the group with the lowest salt intake versus the group with the highest intake.”

Why? He says that low-sodium diets predispose one to having a heart attack because of multiple nutrient deficiencies of minerals, potassium and B vitamins.

Of course, I’m not talking about table salt (99.9 percent sodium chloride), which is not what you want in your food. But establishment medicine has so corrupted the word “salt” that most people cannot or will not see the difference.

We use sea salt instead. Think of sea salt, which is unrefined, as a whole, living food, because that’s just what it is. Its mineral content promotes your best possible life function and gives you incredible cellular health.

You only need very small amounts of these minerals to better the function of your body systems. They rejuvenate your electrolyte supply and rebalance your acid/alkaline levels.

How does sea salt accomplish this? Sea salt is only 84 percent sodium chloride, and the other 16 percent is mineral content: as many as 80 minerals (depending on the brand), including magnesium, calcium, sulfur, bromide, iodine, zinc, potassium and iron.

These mineral electrolytes are used within the body much differently than processed sodium chloride. You’ll find sea salt doesn’t cause swelling like sodium chloride does. In addition, natural salts from plants are also used by the body for the reversal of disease.

Over the past several years, I’ve received many reports of simple sea salt (¼ to ½ teaspoon per day) in a glass of water allegedly curing people of Type II diabetes and various forms of arthritis. I can also say this with certainty: Be sure to give your pet sea salt on a regular basis.

There are many kinds of sea salt: Mediterranean, Himalayan, Pacific and many more. They all have slightly different tastes. You can choose whichever you like best. When shopping for sea salt, just be sure that it has not been refined or boiled to produce the crystals. The sea salt should be harvested and allowed to dry by evaporation in order to be labeled “natural.”

If you are still worried about salt and hypertension, my friend Michael Cutler, M.D., says that you can offset the hypertensive effect of your sodium intake by eating foods high in potassium (potatoes, sweet potatoes, tomatoes, spinach, apricots, bananas, beans and plain yogurt) and fresh juices (prune, carrot, tomato and orange).

I write about the benefits of sea salt and many other natural remedies and cures each month in The Bob Livingston Letter.