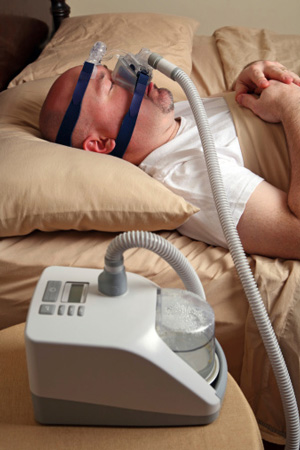 Obstructive sleep apnea (OSA), which occurs when you temporarily stop breathing during sleep, has been linked to a wide range of serious health issues including high blood pressure, stroke, heart attacks, and diabetes. Fortunately, you can use natural methods to cope with this health menace.

The conventional methods used to cope with sleep apnea can be expensive and cumbersome. For example, continuous positive airway pressure (CPAP), which uses a special ventilating mask to keep air flowing into the lungs, is often considered the gold standard of treatment for moderate or severe sleep apnea. Designed to reduce symptoms and shrink the health risks of apnea, the masks are uncomfortable. Many people can’t stand to sleep with them attached all night. Dry mouth, face rash, nasal congestion, and unbearable claustrophobia are common complaints.

A 2002 study reported in The Lancet looked at 118 men with severe sleep apnea. They found that CPAP reduced blood pressure (by only a very small amount), eliminated some daytime sleepiness and boosted the quality of life.1

Dental appliances enjoy a 40 percent success rate at making significant improvements in sleep apnea, according to Australian researchers who reported in the September 2011 Swiss Medicine Weekly.4 (This is a similar rate to CPAP’s success rate.) These are designed to alter the shape and size of the bony structures of the mouth and bony arch of the upper throat. That changes the lower aspect of the mouth so that soft tissues are less likely to cause airway obstruction. At the same time, the nasal passages open wider and improve airflow.

There is a range of other helpful appliances available. Some can be purchased online for as little as $65 (http://www.nosnorezone.com/).

Alternatively, some people opt for surgery: Septoplasty alters the nasal passages. Uvulopharyngopalatoplasty removes some of the tissue at the back of the throat and resembles a face-lift of the throat.

Weight loss often helps to relieve apnea. The more overweight you are, the more likely it is that losing weight can help.

Herbs to reduce allergies (like lobelia and thyme) or to improve sleepiness (melatonin, valerian root, passion flower, chamomile) may alleviate apnea, although I haven’t found extensive evidence for their efficacy.

If you try anti-allergy herbs, also consider eliminating foods that may be allergens. This can most effectively be done by first going on a liquid cleanse for three to five days, and then re-introducing foods slowly to watch for a recurrence of allergy symptoms like nasal congestion.

Changing the position in which you sleep can also reduce apnea. More than half of patients with sleep apnea find that when they sleep on their backs, they suffer twice as many apneic episodes compared to sleeping on their side. (This was demonstrated in a large study reported in a 1997 issue of Chest.6)

Many people manage to stay on their sides when asleep by placing a tennis ball in a  pocket made on a wide cloth belt that is worn around the chest. The ball is positioned right in the middle of your back so that when you roll onto your back, the ball forces you to quickly roll back onto your side. Using a long body pillow can also assist in keeping you sleeping on your side.

Exercises for these muscles include:

Other measures you can take include opening your nasal passages with a hot shower right before bed, a saline water rinse or nasal strips that help open the nose.

Removing allergens from your sleeping area may also help. Use an air filter in the bedroom. Vacuum up dust mites that may cause a stuffy nose and remove furniture that collects dust. (I once had to remove an alpaca rug that rested at the foot of my bed.)

I hope this gives you some new insight into snoring and obstructive sleep apnea.

To your best health,