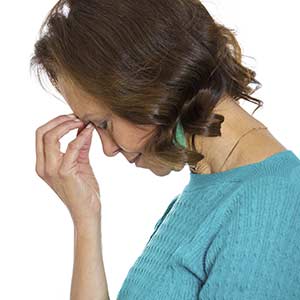 Previously, I explained the important differences between synthetic and real estrogens and progesterone, including the research showing the benefits of the real, natural hormones (information that is still being ignored by mainstream doctors).

Women who take hormones should be taking natural progesterone with or without natural estrogen. You also need to know what happens when estrogen becomes dominant relative to progesterone levels.

In the body, progesterone is primarily manufactured in the adrenal glands and ovaries, though some is produced in the brain.

What does progesterone do for women? First of all, progesterone regulates your menstrual cycle and prepares your uterus for gestation: We know that pregnancy requires high levels of it for gestation to occur. Progesterone is calming and provides for restful sleep. Most notably, it prevents the symptoms of PMS.

In addition to treating PMS symptoms, progesterone supplementation during or near the menopause years acts much like estrogen in treating menopausal symptoms (hot flashes, breast tenderness, decreased sex drive, vaginal dryness, irregular periods and even urinary leakage or urgency). A one-year trial of bio-identical transdermal progesterone cream in postmenopausal women produced a significant reduction in hot flashes, according to a 1999 report in Obstetrics and Gynecology. [1] But it has important long-term health effects, too.

While the media successfully portrayed synthetic progestin and/or oral estrogen as harmful for long-term use (which they are), they failed to proclaim the health benefits of long term bio-identical progesterone and transdermal (e.g. topical cream) estrogen. These benefits include protection from uterine and breast cancers, lowering your heart disease risk (one of many ways to do this) and reducing osteoporosis (only one of many ways to do this, too).

A long list of studies have taught us that natural progesterone helps reduce breast cancer:

Progesterone also is beneficial to heart health. It has a vascular relaxation effect (to lower blood pressure and the strain on the heart). The Women’s Health Initiative studies showed that progesterone (unlike synthetic progestins) increases the cardio-protective effects of estrogen and reduces the risk of heart attack and stroke. Progesterone also improves lipid profiles and helps estrogen to improve lipid profiles (unlike synthetic progestins). There are several similar studies to show this beneficial heart health effect from natural progesterone.

Scientists have observed that natural progesterone stimulates osteoblast activity (new bone formation) and helps prevent osteoporosis. [7] Estrogen does, too. And when added together, progesterone and estrogen collaborate for maximal prevention of bone loss. [8]

The other contributors to bone loss are poor eating habits, vitamin and mineral deficiencies, and lack of exercise.

Natural estrogen (cream, not pills) replacement simply works better than synthetic estrogen pills do for reducing menopausal symptoms. A study using estriol therapy that was reported in the November 1987 Hormone and Metabolic Research [9] showed that it reduced menopausal symptoms in 92 percent of subjects and completely elimination hot flashes and sweating in 71 percent of the subjects. It completely eliminated depressed moods in 24 percent, and depressed moods were reduced in severity for another 33 percent. It also reduced headaches by two-thirds, and skin improved in some of the subjects. And there were no significant side effects reported.

Animal and human studies show that transdermal estrogen replacement therapy, when started before menopause, decreases memory loss in older age. [10] In the Italian Longitudinal Study on Aging reported in 1998, researchers found that among the 2,816 women aged 65 to 84 years who were followed, the rate of Alzheimer’s disease was only one-fourth as much among estrogen users compared with the general female population of the same age and multiple other risk factors. [11]

A study reported in 1996 found that that among 156 women who reported taking estrogen after onset of menopause, those who later developed Alzheimer’s disease did so much later (delayed onset) and significantly less (60 percent fewer) compared with women who did not take estrogen. Also, those who had used estrogen longer than a year had even a greater risk reduction for Alzheimer’s disease. [12]

We know that transdermal estrogen lowers bad cholesterol (LDL) and raises good cholesterol (HDL). Coronary artery spasm, which precipitates a heart attack by squeezing down areas of the vessel where there is already atherosclerotic plaque, is decreased with the use of estrogen and also estrogen plus progesterone. [13] Estrogen lowers anti-thrombin III levels, thereby lowering recurrent venous thrombosis (vein clotting).

It is clearly known that transdermal estrogen supplementation reduces bone fracture rates in postmenopausal women. Subjects using only a low dose of only 0.1 mg per day stopped losing bone density and dramatically reduced their fracture rate as demonstrated in two clinical trials. [14] [15]

The health effects of natural transdermal estrogen and progesterone (oral or transdermal) supplementation are very different than the synthetic hormone versions often promoted by mainstream doctors.

In my next article I’ll briefly discuss the best lab tests available to check your hormone levels. If indeed your levels are off, there are several treatment options I recommend even before hormone replacement. I’ll discuss these dietary, lifestyle, herbal and nutrient supplement options; and I’ll show some example cases to illustrate how estrogen and progesterone replacement fit in to make all the difference if your hormones are low or out of balance.