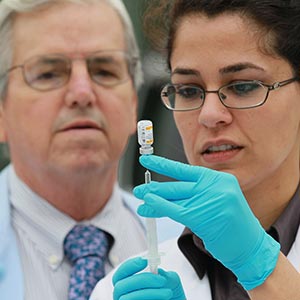 Researchers in Australia have made a disturbing discovery about changes that are occurring in the bacteria that cause whooping cough. And they think these dangerous adaptations by the disease are in response to the whooping cough vaccine.

When the Aussie researchers examined the bacteria Bordetella pertussisf, which causes whooping cough, they found that many varieties no longer possess a surface protein called pertactin. By not having that protein on its surface, the microorganism can hide from the immune system more easily and infect more people.

“It’s like a game of hide and seek. It is harder for the antibodies made by the body’s immune system in response to vaccination to ‘search and destroy’ the whooping cough bacteria which lack pertactin,” says researcher Ruiting Lan. “This could mean that these pertactin-free strains have gained a selective advantage over bacterial strains with the pertactin protein.”

“More studies are needed to better understand the effects of vaccination on the evolution of the organism,” says Lan. “The acellular pertussis vaccine produces antibodies against pertussis toxin which is the main cause of severe disease symptoms produced by the whooping cough bacterium. Vaccination is still the only way to protect against whooping cough, especially for the youngest babies who are most at risk of severe illness.”