Home » Polyphenols Found In Apples May Have Anti-Aging Properties 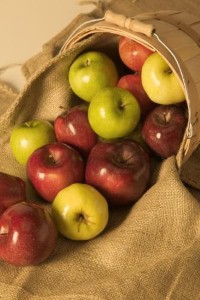 A study that was recently published in the Journal of Agricultural and Food Chemistry suggests that antioxidants found in apples may have the ability to extend lifespan by 10 percent.

Researchers fed apple extract containing polyphenols to fruit flies and discovered that it not only helped them live longer but reduced the level of biochemical substances that have been associated with age-related degeneration.

The authors of the study noted that it is likely that the polyphenols — a type of antioxidant — eliminated cell-damaging free radicals in the insects, thereby extending their lives and improving their health. They also said that the findings support a previous study that showed that women who regularly consumed apples had a 13 percent to 22 percent decreased risk of heart disease.

In addition to being rich in antioxidants, the Centers for Disease Control and Prevention (CDC) reports that a medium-sized apple, about 154 grams, contains just 80 calories and five grams of fiber. This makes the fruit the perfect snack for those looking to lose weight.

The CDC also says there are more than 2,500 varieties and they’re grown in 35 states, making them widely available.