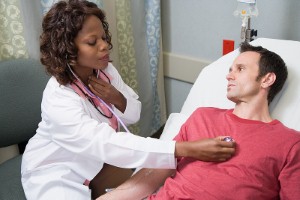 In a study of more than 14,500 participants, a team of researchers found that avoiding risk factors like high blood pressure, excess weight, smoking and diabetes may cut an individual’s chance of developing a heart rhythm abnormality by half.

When the two upper chambers of the heart beat out of sync, it causes an irregular heart rhythm and leads to poor blood flow. This condition is known as atrial fibrillation and an estimated 2 million Americans — mostly the older population — suffer from it.

High blood pressure predicted the development of atrial fibrillation more than the other risk factors, since it was associated with more than one-fifth of all cases in the study.

“Ideally, if individuals were able to maintain a normal blood pressure and healthy body weight and didn’t smoke, not only would it reduce their risks for other forms of cardiovascular disease, such as heart disease and stroke, but it also would significantly impact the risk of developing atrial fibrillation in later life,” said study co-author Alvaro Alonso, M.D.

Authors of the study noted that just 5 percent of the participants exhibited optimal health factors.