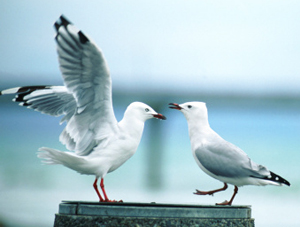 Being splattered by a bird is discomforting under the best of circumstances. Even more disturbing: Seagull droppings have been found to carry “superbug” bacteria, resistant to antibiotics.

Researchers on an island off of Portugal studied the droppings from about 60 birds and found evidence that they contained bacteria resistant to the drug Vancomycin, a so-called “last resort” antibiotic.

The migratory gulls involved in the research can be found across Europe, including England. They are opportunistic marine feeders, readily eating garbage and food discarded by people. It is thought that they may represent one way that antibiotic resistance genes are being spread from globally.

According to researcher Gilberto Igrejas, “Migrating birds that fly and travel long distances can act as transporters, or as reservoirs, of antibiotic resistant bacteria and may consequently have a significant epidemiological role in the dissemination of resistance.”