Home » Stimulate Those Headaches Away 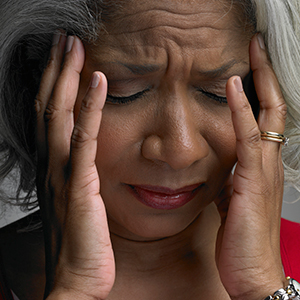 Stimulation on the skin surface has been an integral part of various therapies since the beginning of time. Think about how we scratch an itch, rub a sore ankle or use a loofa to exfoliate the skin. Electro-stimulation is a more recent addition to this arsenal of skin surface treatments, and includes things like from electroshock therapy, electro-acupuncture and transcutaneous electrical nerve stimulation (TENS). Recently, the Food and Drug Administration approved the first ever use of an electro-stim device to help combat chronic headaches. And it looks like this is an effective therapy.

Applying an electrical current to stimulate the nerves on the skin surface is known by several names, including transcutaneous electrical nerve stimulation, electro-stim, microcurrent therapy and neuro-stimulation (among others). An electrical charge is applied to the skin via conductive pads, acupuncture needles, nerve conduction devices and other means. An electrical impulse, which depolarizes nerve fibers, is sent to the skin. This current temporarily blocks pain signals through application of the therapeutic electrical signal from the device. Devices like these are commonly used in acupuncture clinics, physical therapy centers and chiropractic practices. Mostly, such devices have been used to reduce pain associated with neck, back and limbs. Recently, however, the FDA also approved the first-ever stimulation unit used to specifically treat migraine headaches. The Belgian-made device, known as Cefaly, has been proven effective in clinical trials for more than half of all migraine sufferers, and is also approved for pain prevention of any type. The Cefaly device is connected to specific areas of the forehead with adhesive electrodes. These target the impulses of the trigeminal nerve, a nerve that travels from the neck and wraps up and around the head. While the exact cause of migraines has been uncertain (although triggers are identified), these specific headaches are thought to be related both to vasoconstriction and trigeminal nerve function.

Several studies over the past few years have yielded some strong results. In 2011 the journal BMC Neurology published the findings of a double-blind versus placebo study on the sedative effects of the Cefaly’s suborbital transcutaneous neurostimulation (sTNS). 30 healthy subjects underwent a series of four vigilance tests carried out under four different experimental conditions: without the presence of the neuro-stimulation device, with sham supraorbital TNS, with low-frequency supraorbital TNS and with high-frequency supraorbital TNS. There was found to be a “statistically significant (p < 0.001) decrease in vigilance (insomnia) and attention during high-frequency TNS, while there were no changes during the other experimental conditions,” leading researchers to conclude that “supraorbital high frequency TNS applied with the Cefaly® device decreases vigilance in healthy volunteers.” A 2013 double-blind, randomized, sham-controlled trial on the effectiveness of Cefaly at preventing migraines, was published in the journal Neurology. The trials were conducted at five Belgian tertiary headache clinics where patients who suffered at least two migraines monthly were given sham or actual stimulator for 20 minutes daily over a three-month period. The results showed a change in numbers of days with migraine per month in 50 percent of responders. The results: “The therapeutic gain (26%) is within the range of those reported for other preventive drug and nondrug antimigraine treatments. This study provides Class III evidence that treatment with a supraorbital transcutaneous stimulator is effective and safe as a preventive therapy for migraine.” A 2013 cohort study of 2,313 headache sufferers, testing the effectiveness of the Cefaly device against migraine, was published in the Journal of Headache and Pain. The study responders used the devise in home for a testing period of 40 days, after which 54.4 percent of study subjects, were satisfied with the devise and willing to purchase one of their own. The study showed the sTNS device to be superior to sham stimulation.

The FDA approval of the Cefaly device is exciting because it is safe, gentle and simple to use. It is also non-invasive and does not damage the liver or kidneys. Also, by using this device to help reduce the onset and pain associated with migraine, patients may be able to reduce the frequency and amount of prescription medication they may currently be taking. Currently, the device is available through prescription only. If you suffer intractable migraines, have a talk with your healthcare provider and see if this new treatment is another answer in your migraine-fighting toolbox.