Home » The Darker Side Of Milk 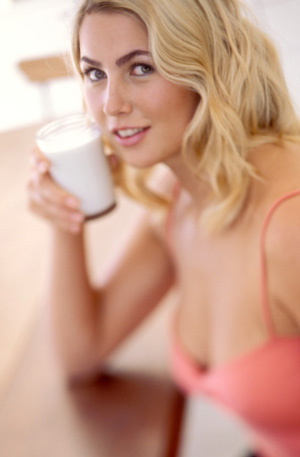 Though your bones are made of calcium, consuming calcium-rich dairy products won’t necessarily strengthen your skeleton. As a matter of fact, research shows that many milk drinkers have weak bones, and milk consumption may contribute to bone depletion.

When you talk about the milk that most people drink, you’re talking about supermarket milk that has been severely processed since it left the farm. Initially it is pasteurized, heated to very high temperatures that kill its healthy, acid-loving bacteria naturally present which your body needs for proper digestion. If they weren’t incinerated during pasteurization, these friendly microbes known as probiotics would contribute to the well-being of your digestive tract. Not having these types of microorganisms in our food has been linked to skin problems, obesity and immune dysfunction.

Another potential defect in supermarket milk stems from pharmaceutical residues from drugs given to dairy cows. These animals are not only regularly given antibiotic injections to prevent sickness, they are also given hormone shots to boost their milk productivity.

It seems pretty evident that advertising slogans like “Got Milk” and other milk-promoting efforts are frankly deceiving the American public. They spread the false notion that cow’s milk reinforces bones or facilitates weight loss. The fact is, no valid studies support these claims. In fact, large, well-designed studies show the opposite. Animal protein-rich dairy products are correlated with decreased bone calcium and increased hip-fracture rates. This is because animal proteins in milk trigger loss of calcium in urine. Got confusion? Let me explain further.

The true test of bone strength is its resistance to breaking, not just how bone appears on X-ray studies. The June 1997 issue of the American Journal of Public Health reported a study of 77,761 women ages 34 to 59 who were followed for hip fracture rates for 12 years. They found that the women who drank two or more glasses of milk per day had nearly 50 percent more hip fractures than women drinking one glass or less per week. This correlates with a large multinational hip fracture study which also found that the countries in which more dairy is consumed have the worst problems with osteoporosis.

There is more you need to know. Milk does not promote weight loss. Two recent studies by the University of Vermont and Purdue University found no difference in weight loss between those who consumed a high-dairy diet and those on a low-dairy diet. Another study published in the June 2005 issue of Archives of Pediatrics and Adolescent Medicine, followed dairy consumption among 12,829 U.S. children for three years. Researchers found that the more skim and 1 percent milk the children drank, the fatter they became. (I’m sure they were not drinking raw milk from a farm.) Dairy’s alleged ability to boost weight loss is based on studies of a single experimenter paid by the dairy industry who used questionable research methods.

If you feel you must drink milk, you should drink unpasteurized whole milk from a reputable farm. Even better is goat’s milk, because it naturally is less susceptible to pathogens. In addition, clinical reports show that milk from goats and goat whey protein powder cause less lactose intolerance and allergies compared to cow milk and whey protein powder from cow’s milk.

Adding to the cancer risk, dairy-milk may contain suspected carcinogens such as the dioxin-like chemicals called polychlorinated biphenyls.5

If you need a milk substitute, you can drink similar-tasting beverages made from vegetable sources without running these health risks. In my home we prefer almond, rice or unpasteurized milk.

Just be careful not to over-consume soy milk. Refined and processed soy foods such as soymilk, soy meats, soy ice cream and soy energy bars have been linked to digestive problems in children, thyroid dysfunction, reproductive disorders, immune system breakdown, heart disease and even cancer in animals. And many soy products are too high in sugar. (In soy milk, this may be listed on the label as evaporated cane juice.) Better choices than refined soy milk are unprocessed and naturally fermented soy foods like tempeh, miso and natto.

Think twice before gulping down a big glass of cow’s milk. Store shelves are replete with other healthy beverages that won’t deplete your health.