Home » The Diet That Saves Gorillas And Humans 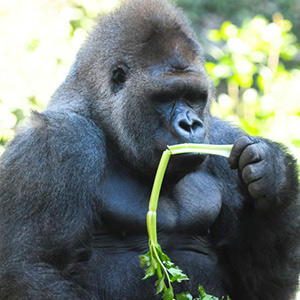 For me, the best part of the paleo diet is that I can eat all I want, lose weight and enjoy better health. But don’t take my word for it. Ask the pair of gorillas at the Cleveland Metroparks Zoo.

After being put on the gorilla version of the paleo diet, the animals at the zoo ate twice as many calories and lost 65 pounds each.

Basically, the gorillas went from eating a processed food diet that was high in starch and sugar (kind of like what most Americans eat) to an unprocessed diet that contains plenty of fruits and vegetables. Their original, processed diet was stocked with the vitamins and nutrients gorillas are supposed to need. But their health and hearts were suffering.

On the gorilla-paleo diet, along with losing weight, the heart health of these animals greatly improved.

“We’re beginning to understand we may have a lot of overweight gorillas (in zoos),” says researcher Kristen Lukas of Case Western Reserve University. “And, we’re just recognizing that surviving on a diet and being healthy on a diet are different. We’ve raised our standards and are asking, are they in the best condition to not only survive but to thrive?”

I don’t think I eat twice as much food as I used to before I went on the paleo diet. But I eat a lot more. And after losing 20 pounds during the first year of the diet, my weight has stabilized.

My paleo regimen basically consists of eating meals and snacks without any grains (no foods made of corn, wheat, rye, barley, oats, etc.), plenty of fruits and vegetables, and no fried foods. It includes fish, organic grass fed meat, nuts and organic eggs. It also ditches legumes (beans and peanuts), dairy foods, potatoes and refined sugar. The only oils I use are extra virgin olive oil and coconut oil.

And I eat virtually no processed food. I cook all my own meals.

One difference between me and the gorillas: They’re vegans, but I eat meat.

The paleo diet keeps me satisfied, the same way it satisfies the gorillas: http://www.youtube.com/watch?v=P9A74LvPxU8