Home » The Food That Helps You Live Longer 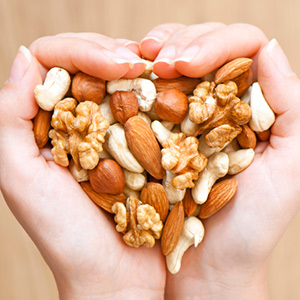 If you want to live longer, researchers have identified a snack food that can keep you alive and kicking. And you only have to eat a handful a day.

In a huge study involving about 120,000 people, scientists from Dana-Farber Cancer Institute, Brigham and Women’s Hospital, and the Harvard School of Public Health found that eating nuts every day reduced the chances of dying during the 30-year study by 20 percent.

“The most obvious benefit was a reduction of 29 percent in deaths from heart disease — the major killer of people in America,” says researcher Charles S. Fuchs, M.D., M.P.H., director of the Gastrointestinal Cancer Center at Dana-Farber. “But we also saw a significant reduction — 11 percent — in the risk of dying from cancer.”

In this research, improvement in longevity was similar for peanuts (which are actually legumes) as well as for tree nuts like pecans, pistachios, walnuts, almonds, hazelnuts, cashews, Brazil nuts, macadamias and pine nuts.

“In all these analyses, the more nuts people ate, the less likely they were to die over the 30-year follow-up period,” says researcher Ying Bao, M.D., Sc.D., of Brigham and Women’s Hospital.

The research showed that the people who ate nuts less than once a week had a 7 percent reduction in mortality compared to non-nut eaters. Those who indulged once a week enjoyed an 11 percent reduction. If you ate nuts two to four times per week, your survival improved by 13 percent. Daily nut eaters, whose survival bumped up by 20 percent, had the best longevity.