Home » The freaky fruit that freaks out cancer 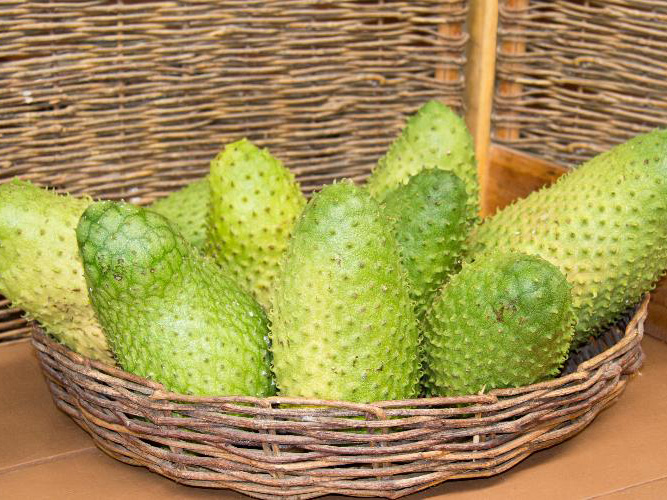 Mainstream medicine is urging caution (of course), but there is evidence that extracts taken from the graviola fruit — also known as soursop, guanabana or guyabano — are potent cancer fighters. Whenever mainstream medicine pooh-poohs something that shows results, I take notice.

The fruit is native to Mexico, Central America, South America Cuba, Puerto Rico and the islands of Hispaniola. Natives eat the fruit’s pulp in salads, and the nectar is used in cocktails. It’s also used to make juices, candies, sorbet and ice cream. Mainstream medicine cautions against even eating it and has linked consumption to movement disorders simulating Parkinson’s disease.

But several studies have shown an extract from the seeds has 10,000 times the potency of the leading chemo agent used to treat colon cancer. And as my research has indicated to me over time, these kinds of plant extracts seem to inherently, yet selectively, seize upon the cancer cells and leave healthy cells alone. Another study showed soursop to similarly attack prostate, pancreatic and breast cancer cells.

A 2011 study published in the journal Nutrition and Cancer showed that graviola fruit extract suppressed so-called oncogene (cancer gene) expression in the cell and animal models for breast cancer. Keep an eye on this.

Editor’s note: As you’ve just read, potent natural cancer fighters exist in nature, but if you wait for them to go from lab to pharmacy it could be too late. Dr. Michael Cutler lists more natural ways to avoid and beat cancer, including the best minerals, herbs, supplements, foods and proven therapies allowed in other countries — but denied to you by American mainstream medicine — all in his comprehensive cancer guide, Surviving Cancer! To get your copy today — plus 3 FREE reports — click here!