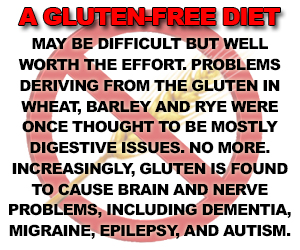 Over and over again, advice on avoiding gluten ominously warns that you should consult a dietitian or other nutritional expert before attempting a gluten-free diet. Seems to me, this is exactly backwards. Those eating a typical gluten-filled diet chock full of white bread, cookies, cakes, beer, pasta, etc. are the folks in serious need of nutritional help. If you eat a basic gluten-free diet, limiting processed foods and sugar while eating plenty of fruits, vegetables and good protein sources, you’re probably eating the healthiest foods available.

Medical researchers are having a hard time nailing down all the implications of what gluten does to human health. We know that gluten, a type of protein found in wheat, barley and oats, cannot be digested by humans. We know that some people have an extreme reaction to eating foods containing gluten. After that, the research picture grows murky.

For those who suffer what is called celiac disease, ingesting gluten causes the body to begin an autoimmune reaction that destroys the lining of the intestinal tract. As the structures in the small intestine called villi are compromised, the body’s ability to absorb nutrients malfunctions. The results are often severe digestive distress and nutrient deficiency diseases. And as you start to suffer malnutrition because nutrients are passing through you, you can also be subject to leaky gut syndrome. The walls of your damaged intestines begin to leak, allowing substances into the body that can stimulate further destruction by immune cells.

In people who react to gluten as I do, digestive problems are milder but gluten sets off an immune inflammatory attack on nerves, brain cells and other parts of the body. This can lead to brain fog, problems with muscle coordination and memory difficulties that resemble Alzheimer’s. In my case, going off gluten restored most of my memory. (Though I can still be in trouble at the supermarket if I don’t have a written list of all the items I intend to buy.)

Beyond those symptoms, reactions to gluten can include a collection of discomforts so bewilderingly wide-ranging it’s hard to believe they’re all linked to same substance. People sensitive to gluten can suffer headaches, chronic fatigue, osteoporosis, lymphoma, irritable bowel syndrome, eczema, irritability, depression, joint pain and a whole host of other distressing difficulties.

Complicating this situation is the fact that some people react to gluten but don’t seem to suffer full-blown celiac disease. Consequently, researchers want to categorize these folks as gluten-sensitive but have so far failed to come up with a rigorous definition of who falls into this category. As you might expect, they also are having trouble coming up with a precise calculation of the percentage of the population that suffers these sensitivities.

Don’t forget – nobody can digest gluten. Does that mean everyone has at least a low-level gluten discomfort but only some have problems serious enough to notice? So far, the experts can’t seem to agree.

If you decide to eat a gluten-free diet, you should focus on eating real food, not items designed to mimic foods that contain gluten. Minimize processed gluten-free foods like cookies, cakes and breads. Seek nutritional guidance if you need help recognizing which foods contain hidden gluten. (Look here for some tips.) Eat at least five servings of fruits and vegetables daily. Eat good sources of protein like fish and meat. (Eat organic, free-range meat where possible.)

If you’re worried about your nutritional status on a gluten-free diet, you can also take a multi-vitamin and multi-mineral to stay supplied with micronutrients.

Experts now estimate that at least 1 percent of the U.S. population suffers from celiac and most don’t know it. Researchers are also baffled about the fact that the incidence of celiac has quadrupled during the last 100 years. Amidst all this controversy, increasing numbers of people are trying a gluten-free diet. Although others differ, my experience with going gluten-free has convinced me it’s a great idea for just about everyone.