Home » The Poison In Your Cash Register Receipt 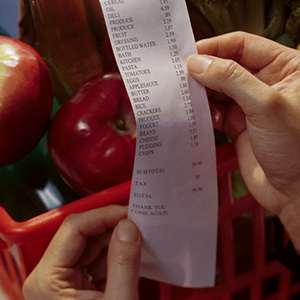 Toxins surround us. But researchers are becoming especially concerned about the cancer risk caused by a chemical found in cash register receipts and canned food. Handle a receipt, and this toxin enters your body through your fingers.

The toxin is called BPA (bisphenol A). Research at the University of Illinois shows that, for men, if your mother is exposed to this plasticizer while you are still in the womb, you have an increased risk of prostate cancer later in life.

“Previous studies have shown that people who (tried to avoid) all contact with plastics or other BPA-containing objects for up to a month or more still had BPA in their urine, which means they must have come into contact with BPA in the last 24 to 48 hours, since it clears the body rather quickly,” says researcher Gail Prins. “It’s very hard to avoid.”

Exposure of a fetus to BPA in utero is of particular concern. The chemical mimics the hormone estrogen and has been linked to several kinds of cancer, including prostate cancer.

“Our research provides the first direct evidence that exposure to BPA during development, at the levels we see in our day-to-day lives, increases the risk for prostate cancer in human prostate tissue,” Prins says. “The findings of adverse effects of BPA in human tissue are highly relevant and should encourage agencies like the Food & Drug Administration to re-evaluate their policies in the near future.”