Home » To Save Your Health Say So Long To Soft Drinks 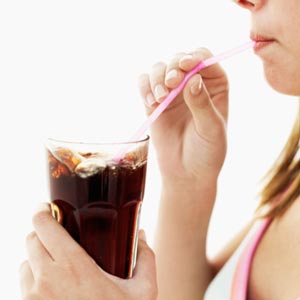 If you chug a quick soft drink during the day as a pick-me-up, the sugar and caffeine lurking among the bubbles may give you a temporary lift, but the long-term effects of these sweet treats threaten a big health letdown. Researchers are finding that these sugar-sweetened concoctions can affect your brain and fat tissue and make you more liable to gaining unwanted pounds, succumbing to heart disease, falling victim to cancer and developing diabetes.

Americans imbibe staggering quantities of sugar-sweetened drinks, a drinking habit that has affected our health. Research into our drinking habits shows that young adults down an average of about 300 calories a day of these beverages. Scientists at the Johns Hopkins Bloomberg School of Public Health have found that during the past two decades the number of people consuming sugar-sweetened beverages (including soft drinks, fruit drinks and punches) has grown dramatically. As a result, on average, every American is now taking in on average about an additional 50 calories a day of sweet drinks compared to 20 years ago. That represents about 18,250 extra calories a year.

Many of those calories come from high fructose corn syrup, a sweetener that has been blamed by many experts for contributing to America’s epidemic of obesity. Aside from the fact that all those extra pounds we carry make us more vulnerable to diabetes, researchers have discovered that substances that accompany the high fructose corn syrup in soft drinks cause cellular damage that add to our diabetes risk.

“People consume too much high-fructose corn syrup in this country,” says Chi-Tang Ho, Ph.D., a researcher who teaches food science at Rutgers. “It’s in way too many food and drink products and there’s growing evidence that it’s bad for you.”

If you’ve ever wondered why every fast food restaurant serves soft drinks flavored with high fructose corn syrup, other research at Hopkins may provide the answer. Unlike glucose (another type of sugar), which makes you feel full and leads your digestive tract to signal that you’ve eaten enough, fructose sets off chemical reactions in the body that make you want to eat more. These reactions take place in a part of the brain called the hypothalamus and involve a substance called malonyl-CoA.

So although you may think you found that cola you had with lunch to be satisfying, the fructose in it may be one reason why you ate every last one of your fries.

Other research into high fructose corn syrup has turned up evidence that it can make more fat cells mature into fat cells in belly fat and less able to respond to insulin, making you more prone to diabetes.

Scientists at the University of Bristol in the United Kingdom found that these effects are particularly insidious in children. “Our results suggest that high levels of fructose, which may result from eating a diet high in fructose, throughout childhood may lead to an increase in visceral [abdominal] obesity, which is associated with increased cardiometabolic (diabetes and heart disease) risk,” warns Georgina Coade, one of the researchers.

Here, too, the scientists compared fructose’s effects with those of glucose. They found that fructose was much more harmful, decreasing cells’ insulin sensitivity, which is the ability to successfully take up glucose from the blood stream. Decreased insulin sensitivity is a characteristic of type 2 diabetes.

High fructose corn syrup also increases your risk of high blood pressure, according to research at the University of Colorado. In a study that looked at the diets of more than 4,500 adults, scientists found that people who consumed the amount of fructose in two and a half soft drinks a day had a 77 percent increased risk of extreme hypertension.

“These results indicate that high fructose intake in the form of added sugars is significantly and independently associated with higher blood pressure levels in the US adult population with no previous history of hypertension,” according to these scientists.

High fructose corn syrup has also been linked to cancer. And you don’t have to down many colas to increase your cancer vulnerability. For example, although you might think that consuming two soft drinks a week is a reasonable way to indulge your sweet tooth, a study at the University of Minnesota has shown that those two weekly beverages can double your risk of pancreatic cancer compared to people who never imbibe.

“The high levels of sugar in soft drinks may be increasing the level of insulin in the body, which we think contributes to pancreatic cancer cell growth,” said Mark Pereira, Ph.D., senior author of the study.

The evidence for the harmful health effects of high fructose corn syrup is as clear as the glasses of water you should be dinking instead of soft drinks.