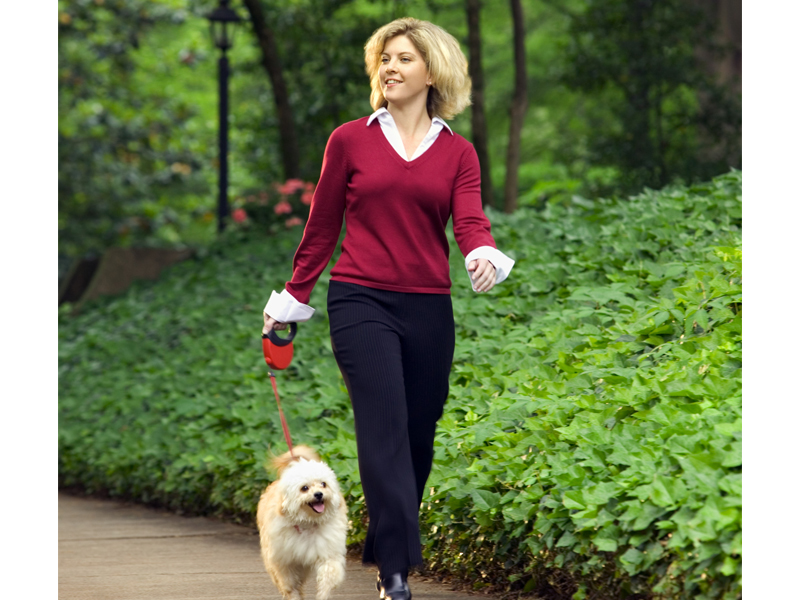 For years, I’ve worked out with a trio of personal trainers who help me stick to a consistent exercise program. And I recommend their motivational technique for anyone who wants to enjoy better health.

My trainers increase my devotion to daily exercise with the way they greet me: They wag their tails, lick me and jump up and down with excitement as soon as they see me with their leashes in hand.

Of course, I don’t need much persuasion to take my three trainers… er, I mean dogs, for a daily walk. I’m addicted to exercise and I also jog and lift weights in addition to our daily hour-long trips through the neighborhood.

The idea that owning a dog (or dogs) results in more exercise is a notion promoted by public health experts. Research supports the idea that having a dog can help you engage in a consistent program of physical activity.

A study at Michigan State University shows that people who own and walk their dogs are 34 percent more likely to get enough exercise to meet the daily activity quota that experts advocate. (They urge everyone to do about 25 minutes of walking a day.)

That’s why researcher Mathew Reeves, an epidemiologist at Michigan, says that public health programs should do more to promote dog ownership and walking. Right now, fewer than half of all Americans get enough exercise on a daily basis to keep their health strong.

“Walking is the most accessible form of physical activity available to people,” says Reeves. “What we wanted to know (in our study) was if dog owners who walked their dogs were getting more physical activity or if the dog-walking was simply a substitute for other forms of activity.”

In their research, Reeves and his colleagues analyzed health data from the Michigan Behavioral Risk Factor Survey, a yearly survey of health and lifestyle habits performed by the Centers for Disease Control and Prevention (CDC) and the Michigan Department of Community Health. The data revealed that only does having a dog lead to more walking, but that dog ownership is linked to an overall increase in healthful physical activity.

The study shows that dog owners walk, on average, an hour more a week than other people.

“Obviously you would expect dog walkers to walk more, but we found people who walked their dog also had higher overall levels of both moderate and vigorous physical activities,” Reeves says. “There appears to be a strong link between owning and walking a dog and achieving higher levels of physical activity, even after accounting for the actual dog walking.”

Middle-aged people who are working seem to have the least amount of time available to walk their dogs.

Younger and older people do the most dog walking.

Big dogs (over 45 pounds) get longer walks than smaller dogs.

As you get older, owning and walking a dog may become particularly important for keeping you active and socially engaged. A study of more 150,000 older women in their 60s that compared dog owners and non-owners, showed that the dog owners were much more likely to get out of the house every day.

Another study, this one of middle-aged dog walkers, shows that when people in a neighborhood get out and walk their dogs more often, it increases social interactions and bolsters feelings of community. Those types of social developments can also, say the researchers, support healthy aging.

If you have a dog and don’t walk it, you are missing out on a chance to improve the dog’s health as well as your own. Research shows that helping your dog lose weight by getting more exercise improves their quality of life.