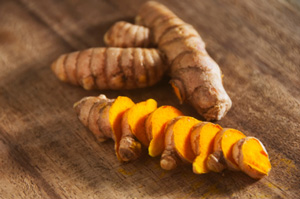 Turmeric, the spice that makes mustard yellow, has medical folks making plans for a new weapon in the war on cancer. An extract of the turmeric root contains the phytochemical curcumin, which has been shown to eliminate cancer cells from the body. And it costs as little as $8 to administer at levels that rival the effects of chemotherapy.

This low-cost, natural substance is taken by countless people every day to prevent cancer — and at chemotherapy levels to treat cancer in early and advanced stages without side effects.

Curcumin is one of hundreds of natural chemicals found in the turmeric root. People often use the terms turmeric and circumin interchangeably, but turmeric refers to the whole food or whole herb and curcumin is an extract with significant therapeutic properties.

Curcumin’s medicinal use dates back 6,000 years ago to the ancient Egyptian pharaohs and Ayurvedic medical practitioners in India. Today, curcumin is an antioxidant used to combat arthritis, inflammation, tumors and neurodegeneration.

An American pharmaceutical company tried to patent turmeric when Western researchers first revealed its cancer-fighting properties, but health practitioners and suppliers from India were outraged since practitioners had been using the herb for thousands of years to heal and treat major diseases.

“Curcumin has broad anti-cancer effects during initiation, promotion and progression of tumors. Several studies suggest that curcumin can cause cancer to regress, has action against carcinogens, substantially reduces the formation of mutagenic (cancer causing) chemicals and eliminates DNA damage to prevent the development of cancer,” says Karta Purkh Singh Khalsa (KP), Yogaraj in Ayurveda, author of Herbal Defenses and one of the world’s foremost natural healing experts.

Curcumin has been shown to be effective for both cancer prevention and treatment because it contains potent levels of:

Experts believe curcumin may prove helpful in reducing our high breast cancer rates because it can slow and stop the division — and the spread — of cancerous cells. In a study on human breast cancer cells, curcumin reversed cancer’s development by 98 percent. Another study using curcumin in mice hindered the spread of cancer from the breasts into the lungs, throat and other areas.

Researchers at the University of Texas MD Anderson Cancer Center conducted a study that showed that adding curcumin into cell cultures containing multiple myeloma (a type of cancer) stopped cancer cells from reproducing — and killed the remaining cells.

Curcumin also obstructs cancerous cell growth by activating and enhancing the release of human glutathione. Glutathione is a key antioxidant that the body produces to maintain normal cellular activity. Working together, glutathione and curcumin inhibit cellular mutagens that might otherwise promote cancer.

Curcumin has also been shown to reduce chemically induced cancer by 90 percent, including mouth and tongue cancers caused by smoking. Curcumin inhibits activities of the P450 liver enzyme that would otherwise convert environmental toxins into carcinogens, which stimulate cellular mutation and promote cancerous growth.

“Curcumin has been found to influence over 60 molecular targets in the cancer process. With an established safety record and a fraction of the cost of conventional chemotherapy, plant compounds like curcumin represent an enormous and almost untapped resource for cancer treatment,” says Jonathan Treasure, co-founder of Centre for Natural Healing and co-author of Herb, Nutrient, and Drug Interactions: Clinical Implications and Therapeutic Strategies.

High doses of pure curcumin are required to reach chemotherapeutic levels; however, over-the-counter supplements can provide a high concentration of the extract.

For the proper dose of curcumin for cancer treatment, consult with a naturopathic doctor or an Ayurvedic medical practitioner.

is a natural health journalist and the Managing Editor of The Underground Health Reporter™. She is also the spokesperson for Think-Outside-the-Book Publishing, the publisher of The One-Minute Cure: The Secret to Healing Virtually All Diseases, which reveals the scientifically proven therapy that creates a condition in the body that is uninhabitable by disease.