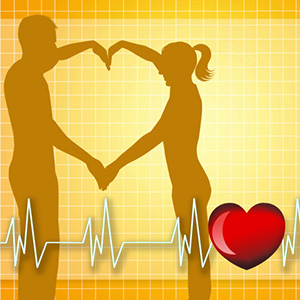 Does your significant other make your Valentine’s Day significant? The answer to that question could determine the state of your cardiovascular health.

Research at the University of Utah shows that being involved with a supportive partner supports the well-being of your heart and arteries.  However, when partners perceive that they are merely ambivalent about each other (sometimes being helpful but often being abrasive), their arteries may be hardening more quickly.

“There is a large body of epidemiological research suggesting that our relationships are predictors of mortality rates, especially from cardiovascular disease,” explains Bert Uchino, psychological scientist at the University of Utah. “But most prior work has ignored the fact that many relationships are characterized by both positive and negative aspects — in other words, ambivalence.”

Uchino’s study surveyed 136 couples about the state of their relationship, focusing on how helpful or how upsetting each spouse was during times when a partner needed support, advice or a favor.

The researchers found that about 30 percent of the people in the study believed their partners delivered positive support, but 70 percent viewed their partner as ambivalent — sometimes helpful and sometimes upsetting.

Using a CT scanner to check for overall calcification in the subjects’ coronary arteries, the scientists discovered that calcium levels in the arteries were most prominent when both partners in the relationship viewed each other as ambivalent.

“The findings suggest that couples who have more ambivalent views of each other actively interact or process relationship information in ways that increase their stress or undermine the supportive potential in the relationship,” says Uchino. “This, in turn, may influence their cardiovascular disease risk.”