Home » The vibration of health 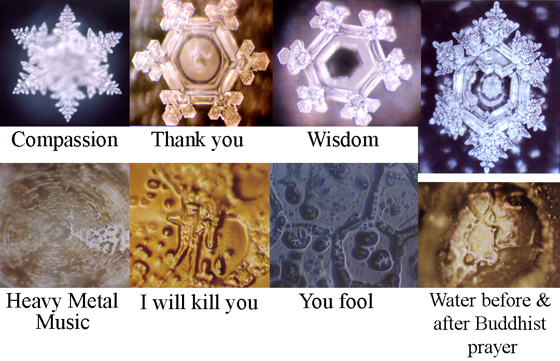 Everything in the universe vibrates. People, trees, stars and sounds all vibrate. Yet everything vibrates at different frequencies. The vibratory frequency of a piece of wood versus a piece of metal are different. They may look like solid objects, but actually they are made up of subatomic particles buzzing and flying around at various rates.

Energy is nothing but vibration, and we are surrounded by energy; we are made up of it. The vibratory rate of healthy humans is different than that of unhealthy humans. The trick is to raise our vibration in several ways to resonate at rates that are in the healthy human spectrum. This means adjusting how we think and what we think about, how we view the world, the words we use, the music we listen to and the food we eat.

It may seems strange to many that by changing our vibration we can change our health. But I assure you it is a valid concept. I have spent decades practicing so-called ancient Chinese energy medicine, known as qigong. There is a specific method of qigong called liu zi jue or “six healing sounds.” In this method, the practitioner holds his hands over each organ system and then utters a specific sound. Each sound resonates with a specific organ. Therefore, by uttering the sound specific to an organ while holding your hands over the organ, you can actually focus your intention on the area and feel the organ vibrate. This vibration helps expel negative lower vibration (energy) in the organ while toning it to its resonant sound.

I practiced this method for decades with success. But I always wondered if the sound really had an effect on the organ or if it was just my own suggestion, like a placebo effect. In the late 1990s I found the proof I was looking for.

In the late 1990s Dr. Masaru Emoto began an experiment to see the effects of sound (music), words (spoken and printed), photographs and prayer on water as it crystalized. To get the most pure water possible for his experiments, Emoto used only twice-distilled purified water used in hospitals. He then set about playing music through headphones on water bottles, affixing printed words and photographs to the bottles while they are in the process of freezing. He then took photographs of their hexagonal crystals.

Amazingly, the water that had Mozart, prayer and words like “love” and “appreciation” and loving photo images affixed to them resulted in the most beautiful water crystals. While words like “hate” and commands like “just do it” and some rap music resulted in crystals partially formed and even grossly deformed. No matter which ‘bad” words or “rap songs” or “good” words or images where affixed, the results were similar.

The body is mostly water

Because the body and blood is mostly water, it makes sense that bad words and negative images and messages in song can have a negative effect on human health. Everyone knows someone or of someone who lives in a “bad” neighborhood, or whose parents or siblings yell commands or “put downs” at them. It’s no wonder the people exposed to this environment (physical, sound, words) are depressed, anxious, psychiatric and often develop bad habits like drugs, drinking to excess and so on. While many who live in better neighborhoods have more energy, are generally more positive and lively. The negative and positive sounds, sights, words and images change the vibration in the body and its organs and fluids and this affect one’s health, for better or worse. 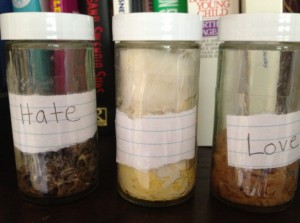 I saw somewhere on YouTube where a guy wanted to test if Dr. Emoto’s “water crystal” experiment could be transferred to a different matter. This person boiled plain rice, placed it in three glass jars and affixed different labels to each. After three months the images he showed were compelling. My family and I decided to do the experiment for ourselves. Here’s what we did.

We boiled organic brown rice and placed a similar amount into three separate glass vials. We taped a piece of paper to each. One was labeled with the word “hate,” one with the word “love,” and the other with no word at all. We figured the blank piece of paper would either have no change or a negative one, representing “disinterest,” as many who feel ignored end up feeling ill and having low self-esteem. We placed the three vials on a bookshelf and the remainder of the rice in the refrigerator, as a control.

Within a week we could see changes to the rice within the vials. Now we are three months forward and the vial with the word “hate” on it has what looks to be black mold growing all over the rice. The vial with no writing has what appears to be white mold or fungus all over it. And the vial marked “love” looks like new; like you could eat the rice!

The results of Dr. Emoto’s water experiment and my own rice experiment show objective changes to things that could not have any subjective or auto-hypnotic suggestions to change otherwise. Objectively, there is change and the change is either positive or negative, and also reproducible.

If everything vibrates at different frequencies, and words and sounds and sights and even printed letters and images resonate at specific frequencies, and these frequencies are either high (positive) or low (negative), then what better way to control or repair health than by controlling our environment?

If you feel sick, mentally or physically, and listen to music with negative themes or words, have people putting you down or yelling at you, have violent images in your home or work, perhaps it is time to consider the vibratory nature of health and wellness. Make changes to your life and see how you feel. My family and I made tee-shirts with the words “love, gratitude and appreciation” on them and use them to sleep in at night. We want the positive vibrations of these words to keep us well, just like the positive words on the water and the rice.