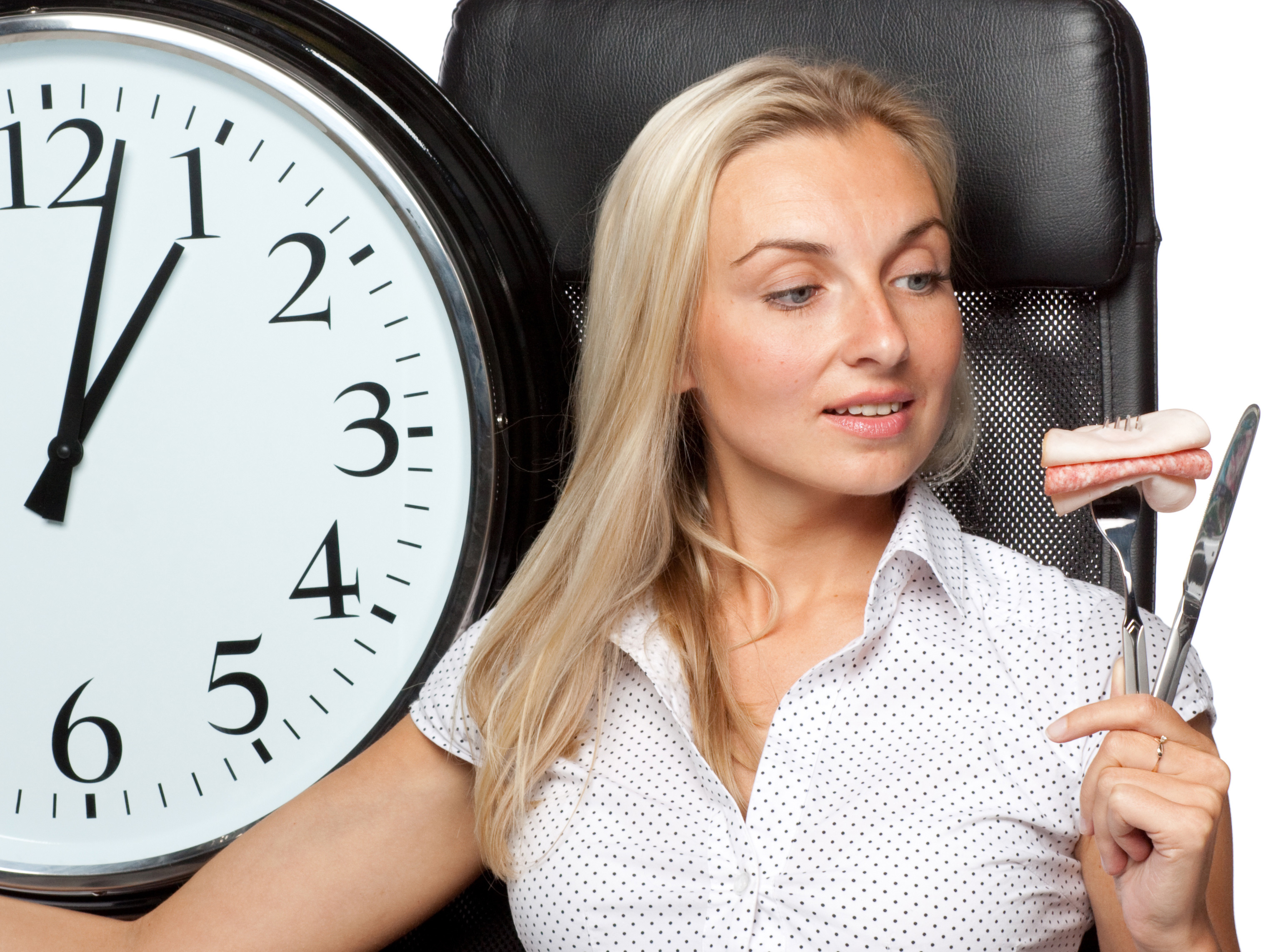 If you eat a cheeseburger at lunchtime or at 11pm, is it just as fattening? Not necessarily…

If you’re eating a certain way to lose weight and get healthier, the timing of your meals and snacks may be almost as important as the foods you eat. And doing it wrong can sabotage all of your good intentions.

That’s because new research indicates every organ in your body has a clock. And when you eat at strange, unpredictable times,  timing gets thrown off and your clock can malfunction. The results can be high blood sugar, extra pounds around the middle and other metabolic malfunctions.

Eating round the clock

The study at the Salk Institute for Biological Studies in La Jolla, California, demonstrates that eating round the clock, at just about every hour of the day and night, makes you more likely to put on pounds and that you’re better off restricting your munchies to just eight hours during the day.

And get this: lab tests showed that restricting your food consumption to eight hours during the day is less fattening than snacking and dining on and off from morning until bedtime — even if you eat the same amount of food.

That’s because our genes are programmed to a daily cycle that lets them perform certain duties (like producing blood sugar or breaking down cholesterol) when we eat. When we are not eating they need to go to into rest mode.

According to researcher Satchidananda Panda, “When we eat randomly, those genes aren’t on completely or off completely,” comparing what happens to fitfully napping at odd times instead of sleeping soundly through the night: That lack of deep slumber leaves us in a kind of mental twilight zone. We’re zombie-ish and neither fully awake or fully asleep.

And our weight isn’t the only thing that suffers from around the clock snacking and late nights recreating with electronic devices. Panda points out that your skeletal muscles as well as your heart, your liver, your kidneys and, of course, your brain, have particular times when they work most efficiently and other times when they need to rest — to go physiologically offline.

For many of us, these patterns may be getting worse. In Panda’s view, society is coaxing us to push our bodies to extremes more and more every year. Thanks to non-stop marketing campaigns by food companies, we’re eating more round the clock and we’re staying up later and later, getting less and less regenerative sleep.

I would have to agree. And that’s a big part of why I switched to a paleo style of eating several years ago.

The paleo diet generally tries to recreate important aspects of the foods and lifestyle that people incorporated into their daily habits before modern agriculture and technological civilization took over our lives.

It’s easy to see how our modern lifestyle — 24-hour instant access that keeps us plugged in to a world of information, games and entertainment that does not sleep — has as much impact on us as the food we eat.

But I can guarantee that paleo humans didn’t stretch out on the couch all hours of the night and polish off a bag of chips into the wee morning hours. Our bodies are just not made to function well that way, and now that we know we’re on a clock, it’s time to get back on schedule and try to drop these sabotaging habits.

Unless you live in a cave, there are going to be times when you need a late night snack. Maybe you have to work late occasionally and can’t always stop to eat when you should. Maybe the kids have soccer practice or a game that goes wrong.

No one will fault you for those times, but I will suggest that if you need a late night snack, choose one that’s helpful to the body. Research shows that a protein shake or possibly just a small piece of meat right before bed might actually help you put on more muscle and keep you from feeling famished the next morning.

Additionally, Research at the Institute of Sports Sciences & Medicine at Florida State University found that when people exercised during the day, having a protein shake at night improved recovery from daily workouts.

The trick is to avoid having chips or sweetened snacks at night and stick to a high-protein shake or food. Plus, make sure you get some exercise while the sun is shining.

I find that, in accordance with this research, a small serving of organic beef or chicken before bed can help me sleep, while chowing down on chips or candy makes me more restless. I imagine a person back in Paleolithic times might’ve done the same thing — chewing the meat off a leftover bone right before falling asleep in front of a flickering fire. Beats the heck out of late night TV.