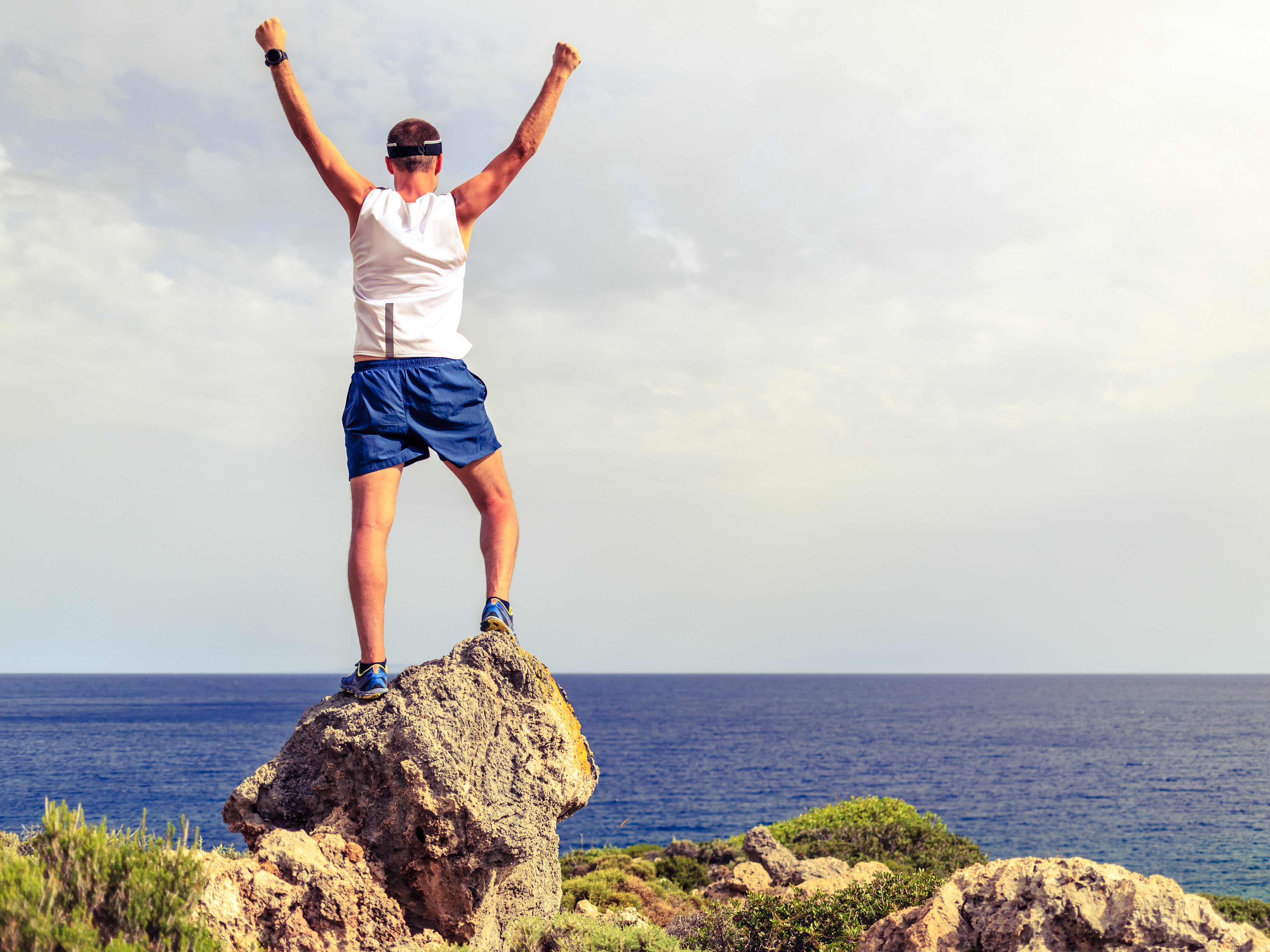 The end of a year offers a natural time to take pause, to reflect and look at where you are in life and health. To be honest, I am not one for New Year’s resolutions; they always elude me and make me feel like I failed myself.

But what does work for me, and what I’d like to share with you, is how I’ve come to calibrate my state of health and enlist change as a motive force for syncing up to where I want to be. It takes some thought, some notes, and some action but the results can be so rewarding and fulfilling. You just need to break down the barriers and have a willingness to move forward. That’s often easier said than done, but in this two-part story I will show you a way forward.

One of the problems with creating the life you want — especially around health and wellness — is overcoming the barriers that block your progress. Often, the difference between someone who succeeds in what they set out to accomplish, and one who doesn’t, is the number and strength of those barriers. Barriers are the unseen walls, road bumps, frenemies, and belief systems that don’t serve our goals but that we hold onto too tightly.

We learn many of our behaviors and develop our belief systems from our parents, teachers and friends. This is true about beliefs around money, relationships and health. Are you worthy of great wealth, great love and great health? Many people will say no, or just accept levels lower than they’d prefer.

This “settling” is often unconscious on our parts, wherein we may believe we are different than our parents, but in mid-life we find ourselves saying things like, “Wow, I am just like my mother” or “Geez, I sound like my dad.” This can be a good thing if those beliefs are positive and supporting of the life you want because belief leads action. But when the beliefs lead to inaction or wrong action, the consequences can be bad health and poor quality of life; even early death.

Barriers are based in beliefs

Barriers are based in our beliefs. An example is having beliefs that poor health is something that happens to you, as opposed to being the result of your actions. From this belief, and if you become unwell in some way, the next belief is that the doctor is responsible for making you better. This takes the responsibly off of you and places it onto another person or thing (medication) outside of yourself. These two beliefs lead to a great deal of inaction on your end, and an almost singular focus on only doing what the doctor says. And we know that treatment of illness is a reaction and that cure only comes from prevention. Prevention requires different beliefs that lead different action.

Other barriers related to wellness that are based on beliefs, are thoughts like, “nothing works for me” and “my case is so bad” and “I’ll never lose weight” and “I have to manage my disease.” None of these thoughts are 100% true. You can find something that will work, because millions of people have had similar issues and recovered or moved past them. Your case may be “so bad” but that is not an indicator of it being “untreatable.” The point is you will “never” accomplish something that you believe cannot be accomplished because it is outside your control—or so you believe.

The worst thing, of course, is over identification with a disease label, believing you are your disease or you own your disease. Examples include thoughts like, “My migraines are the worst” or “My diabetes is getting the best of me.” This ownership of disease creates an over-identification with it, making it an almost permanent part of you that only the doctor can help manage. You can’t release or move beyond something that you identify as a permanent part of you.

What a terrible barrier. It is self-imposed and many of us don’t realize it. I want you to be open to releasing your identification with your poor health and re-identify with a healthier you, or at least begin by accepting the idea that change is on the horizon. Many health limitations are, indeed, self-imposed and held firm by our beliefs. Change your beliefs or have a willingness to consider other beliefs, and your health can change faster than you think.

Are there barriers beyond our control?

It is easy to believe that there are barriers beyond our control. These might include things like: genetics, finances, and time. I am sure you can come up with a more comprehensive list. Have a look at this article I wrote about breaking down these barriers.

The point I want to make is that none of these barriers really matter because you can maneuver around them. And many, indeed, are only barriers because of our belief systems around the ideas of “time” and “money” etc.

For example, you may think genetics is a huge barrier to becoming healthier than you parents or siblings, who also may be overweight, have arthritis, get migraines, and so on. After all, how many times has your doctor told you, and have studies confirmed that genetics plays a “big part” in this or that disease or condition? It’s crazy, especially since we have known for decades that our genetic code offers us the “potential” for those things, and is no indicator of an “absolute” get.

The science of epi-genetics tells us that there are “switches” in the genetic code that can turn on or off to make us develop certain illnesses that our relatives have, or to heal and move past them, or prevent them. I wrote an article on this here that would be terrific to read to learn more about this fascinating field.

So when you say, for example, I am over-weight because all of my family is overweight; it’s in our genes. Or replace “over-weight” with “have diabetes” or “are depressed,” what you really have are belief systems and learned behaviors around those health issues. When studies have been carried out on twins separated at birth or adopted as infants, they don’t see the same health levels or disease manifestation in both children in adulthood, even though they come from the same genetic pool. Instead, they see correlation with the family that raised them, meaning the issues of weight or other are learned (“nurtured”) from the family. Behaviors (like a heavy-carb diet or not seeing the value in exercise, for example) are learned beliefs that lead to the actions of eating too many carbs and not exercises. And it is these, for example, that lead an entire family to obesity, diabetes, heart disease.

The first step to allowing yourself to be more open to change and new ideas, especially those wrapped around health and grounded in beliefs, is to ditch the idea of will-power and instead replace it with a genuine willingness.

We all know that will-power does not work in the long term. It simply gives way because it’s too difficult for most humans to hold such a strong mental position against something that crave or desire. If will-power worked, then everyone’s New Year’s resolutions would actualize, there would be no need for programs like Alcoholics Anonymous (AA), or health coaches, or personal trainers, or drug rehab programs.

Will-power requires a fighting against something. This is a low vibration method that uses too much energy to accomplish; so it fails. The solution is to replace it with willingness, a genuine wanting to do something. And that something comes from the opposite side of giving up of something.

If you have a willingness to make changes, to release barriers by accepting or at least considering different views, you will do better at personal change because beliefs about those barriers can begin to change, or at least become irrelevant.

For example, if you are willing to eat different foods that will help you become healthier (and thus lower cholesterol, reduce obesity or diabetes, reduce joint pain and inflammation), you will have a greater chance of success because no will-power is needed to avoid other foods to accomplish the goal. And studies show that adding more healthy foods to one’s diet, even without changing the baseline (bad) diet, makes positive changes to health overall.

You don’t need to gather your will-power to go to the gym three days a week, to jog, to stand up and walk more often throughout the day, and so on, to make fitness changes. You can simply be willing to find as many chances in your days as you can to move more, to stretch, to walk, to play to be more active. Before you know it, the ease of willingness takes over and you will begin to create opportunities to do more things, more often.

Willingness is fun, especially when you become an evangelist for new ideas and change. Even if you currently have a belief that you are an insomniac, but are willing to try some different things like darkening your room, setting sleep times, meditating before bed, ditching caffeine and so on, you will begin to fall asleep more quickly, more easily. Before you know it–no more insomnia. After all, you can’t force yourself to sleep with will-power, but you can be willing to behave in different ways, to embrace different things, that will allow you to sleep faster in time.

With a willingness to do new things, to accept different ideas about your health and your ability to change it, in my next story I will share an easy multi-step process for calibrating your health and creating positive change.