Home » The secret to lower blood pressure in your pickle jar 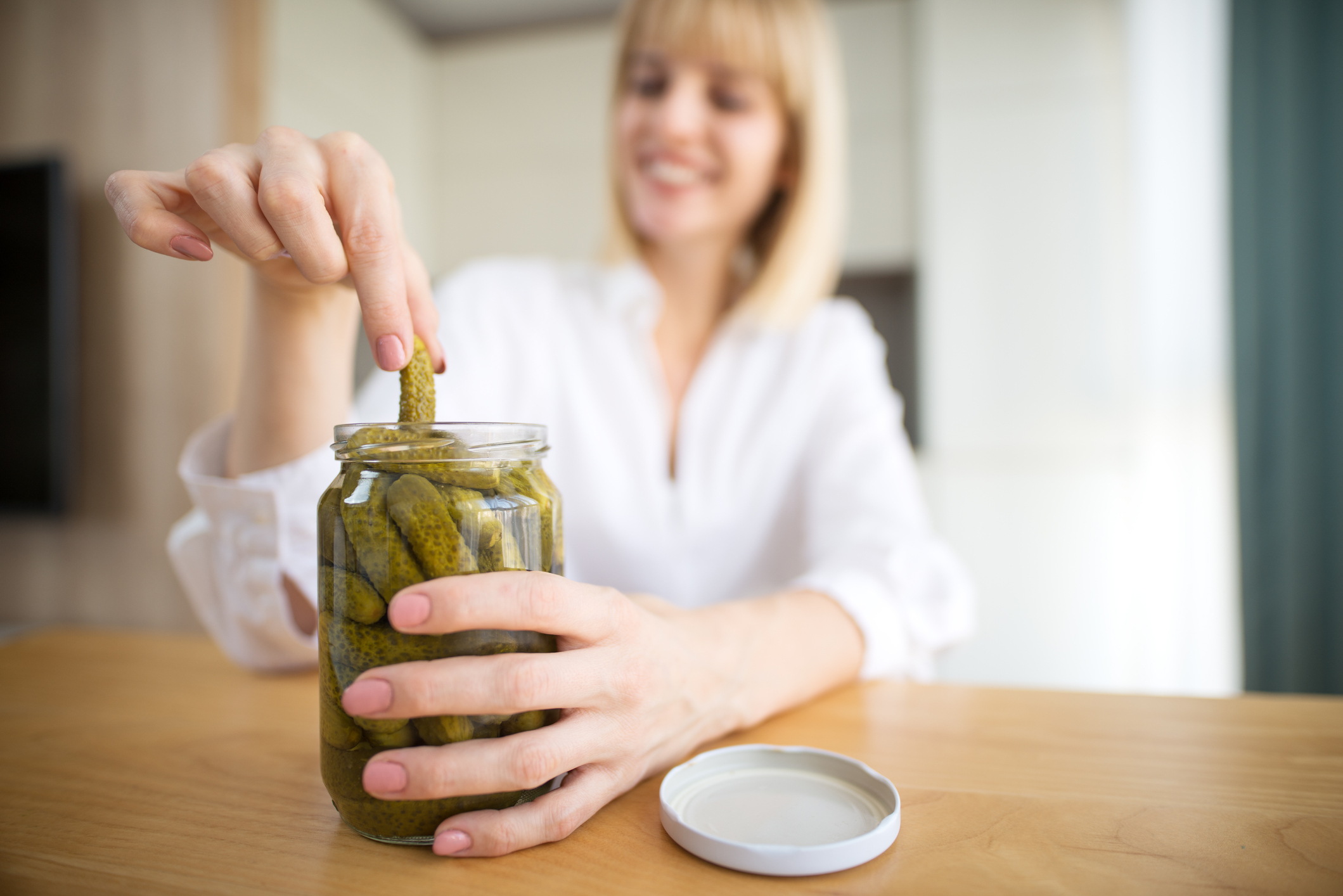 Of all the countries in the world, Japan touts the world’s longest life expectancy.

On the island of Okinawa, most men reach age 84. Okinawan women routinely reach age 90 and are three times more likely to reach 100 than their North American counterparts.

A Japanese diet includes plenty of fish and vegetables, but they also consume about 100 grams of meat a day. That’s not that far off from what most Americans consume — between 100 and 150 grams a day.

They also enjoy tasty condiments, like soy sauce — which contains close to 40 percent of the RDA of sodium. Salt is the main thing your doctor will harp about when your blood pressure starts creeping up.

So why do they live longer — and why do Japanese men who regularly eat a certain traditional dish that includes soy sauce, PLUS almost another full teaspoon of salt, have lower blood pressure?

Certain traditional dishes evolved a lot of folklore around their health benefits. Take natto for example…

The ancient samurai credited natto as one of the foods that gave them exceptional endurance and high energy levels. Of course, back then they didn’t know this fermented bean dish contained an enzyme that over 17 scientific studies, including human trials, have found works like plasmin to promote healthy circulation and lower the risk for blood clots.

It’s called sunomono and you may have enjoyed at your favorite Japanese steakhouse.

It’s popular among older generations in Japan and is even available in prepacked individual portions in supermarkets. This makes it a common source of large helpings of dietary vinegar — something you don’t hear much about in the states.

And a study at Osaka Metropolitan University in Osaka, Japan found that men over the age of 40 who ate sunomono at least monthly had lower than average blood pressure — even when adjusted for age, BMI, smoking history, intake of sodium, potassium, and alcohol, amongst other factors.

They say this indicates that eating sunomono could already be having a positive impact on health.

“Men who did not habitually eat sunomono had significantly higher blood pressure, even though their weight and BMI were the same,” according to lead study author Professor Kanouchi.

The secret’s in the vinegar

Now, how does eating a salad with salt and sugar lower blood pressure?

The researchers don’t say exactly — except that, in Japan at least, the benefits of vinegar are well known. In fact, previous studies have shown that drinking 30 mL of vinegar daily lowered blood pressure.

Of course, some of us in the states, are fans of apple cider vinegar. I drink a little every day, mixed into a small glass of cold water.

And I believe it’s one of the reasons I was able to conquer years of high blood pressure, even though my doctor looked at me cross-eyed when I told him that.

Acetic acid is what gives vinegar its sour taste and smell. And studies do back up its benefits — and those of its synthetic cousin, ethylenediamine-tetraacetic acid (EDTA).

In fact, if we talk about EDTA’s background and what the research shows, you might get a clearer picture of how vinegar could help lower blood pressure…

First, let’s talk about the acetic acid levels of vinegar.

Rice vinegar, the kind used to make the tasty dressing in sunomono has the same amount of acetic acid as apple cider vinegar.

White household vinegar has double the amount, and it is most similar in composition to EDTA.

EDTA is known in the scientific world as a chelator. That’s why it’s used in cases of lead poisoning, to chelate — or remove — lead and other heavy metals from the bloodstream. But that’s not all…

Calcium is one of the main contributors to the narrowing of arteries. It binds with sticky cholesterol and before you know it, blood flow becomes restricted and blood pressure goes up. EDTA chelation therapy helps break down that calcium so it’s excreted from the body.

The Japanese researchers don’t specify the mechanism by which eating sunomono regularly lowered blood pressure. They say it appears to improve the gut microbiome — which certainly could produce body-wide benefits.

But my bet is the chelating effects of vinegar. What do you think?

It’s easy to incorporate more vinegar into your diet. I do it the easy way by adding some to my water once a day. But you can also ditch store-bought salad dressings and just mix equal parts vinegar and olive oil, seasoned with Italian spices.

Whenever I eat cooked greens, I drizzle them with a vinegar-based pepper sauce that consists of mild peppers steeped in vinegar. You can find it at most grocery stores, and it will keep in your refrigerator for months.

The vinegar brine from pickles is likely too salty to be as beneficial but you could consider pickling your own and going lighter on the salt.

It’s also easy to incorporate EDTA. Below is a link to a book to learn more about it.