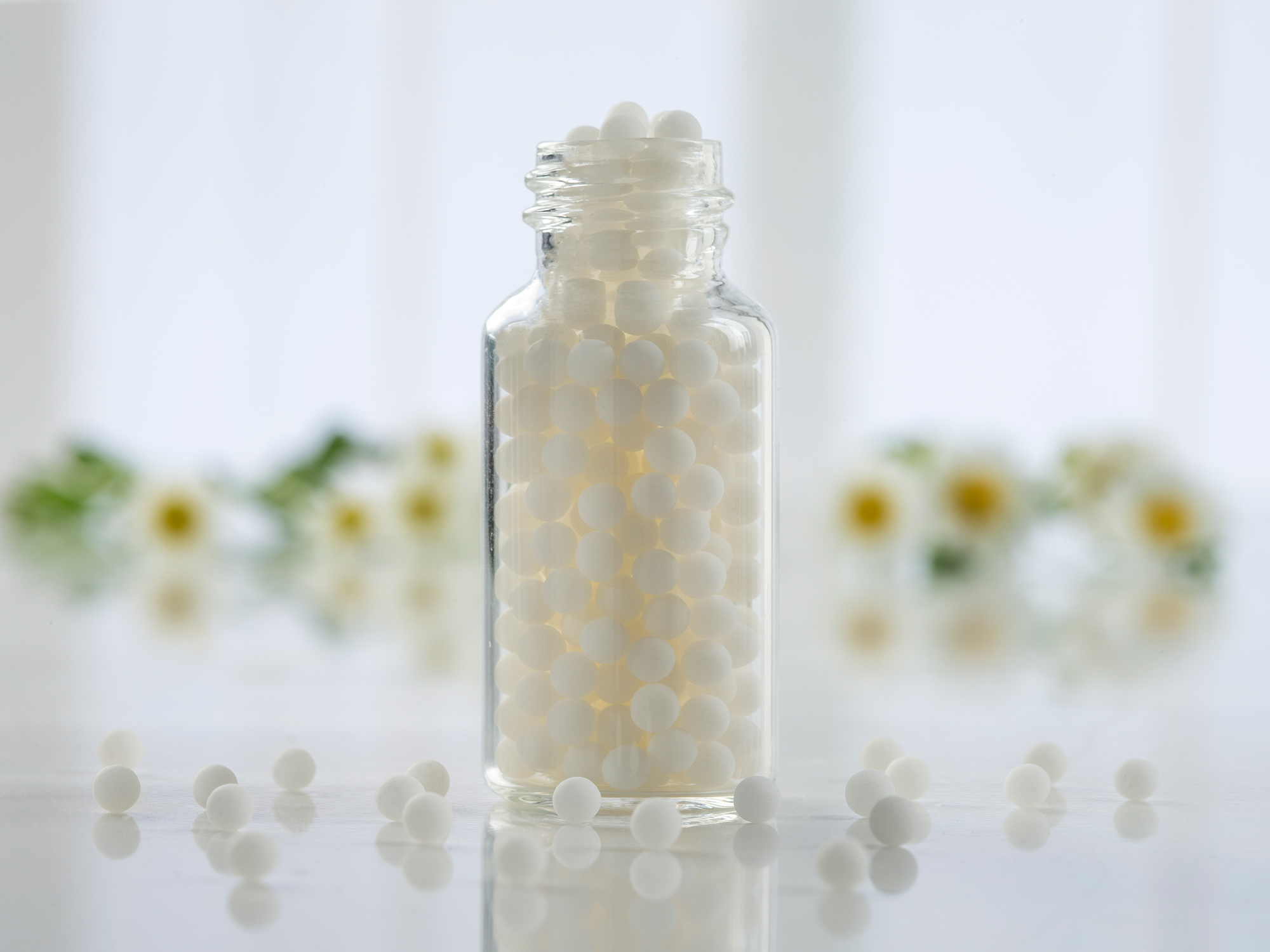 I have never been a fan of homeopathic medicine even though I am a personal advocate for other forms of natural medicine and holistic and traditional health practices. Why?

On my personal journey, searching for relief from chronic body pain, headaches and spells of anxiety and insomnia, I have never experienced a positive response with a homeopathic treatment.

But others have… just as many have been helped by the placebo effect.

Is placebo a sham or a powerful mind-body connection that puts you in charge of your health?

Studies show that about 30% of people respond favorably to a sugar pill or sham treatment posing as the real thing. That is 30% of the time a placebo is “as effective” or “more effective” than the intended medication or treatment for the condition. This is especially so with treatments for chronic pain, irritable bowel syndrome and Parkinson’s disease.

Yet, the Federal Trade Commission (FTC) has named all of homeopathic medicine a sham. Is this fair? Depends on how you look at it…

But from my side of the fence, placebos are a boon to health and wellness and prove the immense power of personal expectation on our ability to heal ourselves. So today I’d like to review the sham statement and some placebo findings to show how our minds are often more powerful healers than medicine.

A rush to judgment?

The United States Federal Trade Commission (FTC), followed suit and has also released its new policy statement on the subject, warning consumers to beware of fake advertising claims as to its effectiveness.

“Homeopathy, which dates back to the late-eighteenth century, is based on the view that disease symptoms can be treated by minute doses of substances that produce similar symptoms when provided in larger doses to healthy people. Many homeopathic products are diluted to such an extent that they no longer contain detectable levels of the initial substance. In general, homeopathic product claims are not based on modern scientific methods and are not accepted by modern medical experts…

“There is no scientific evidence that the product works and (2) the product’s claims are based only on theories of homeopathy from the 1700s that are not accepted by most modern medical experts.”

But is this the right view and approach?

Not in my mind; even though, as I said, I have not had much success with homeopathic treatments. Not everyone is the same, however.

But even the high-quality studies did not find that homeopathy performed better than a placebo.

And here lies the rub…

Placebos work for a biological reason

If homeopathic medicine are said to be “no better than placebo,” whys are they being black balled?

Instead, the medical establishment should be hailing their praises as a widely used and effective placebo that helps millions of people, keeping them from unnecessary and/or toxic prescription drugs.

In his new book Suggestible You: Placebos, False Memories, Hypnosis, and the Power of Your Astonishing Brain, author Erik Vance puts forth rhyme and reason for the body responding the way it does to placebo. I’d like to share a bit of his recent interview her with MedPage Today associate editor Kristina Fiore.

Fiore: What is the most striking thing to you about the placebo effect?

Vance: Early on I was just struck… by the chemical nature that certain elements of belief are attached to. The fact that a placebo can simply be expectation in the prefrontal cortex triggering the release of endogenous opioids. These are chemical structures you can draw on a piece of paper. It’s not just fooling yourself.

As I went on, the thing that has stuck with me is the variability between diseases and people, and why some diseases respond so well to placebos reliably and some diseases don’t. Then there’s the frustrating one, which is the fact that some people respond to placebo and some people don’t. That’s a little more enigmatic, but it does suggest that there are rules at play — rules that we can learn.

Fiore: Let’s first talk about the conditions that respond to placebo. These are things like anxiety and depression, and even Parkinson’s disease. Why is the placebo effect so strong in these conditions?

Vance: Well, the easy response is dopamine. Dopamine is obviously involved in rewards, it’s involved in movement, it’s one of those “big shot” neurochemicals that has fingers in a lot of different pockets. Because of its reward relationship, when you think you’re going to get something or when you expect something to happen, it triggers dopamine.

Fiore: Another interesting point was that doctors can harness the power of placebo, perhaps by delivering a positive message along with a prescription. Or perhaps it’s just about good bedside manner.

Vance: This is the most important thing, I think, for doctors to know. Alternative medicine practitioners are masters of paying attention to these systems, and harnessing their effects. Why not do the same thing? It’s like you’re throwing away 30% of your cure if you don’t engage the placebo effect. Some doctors do this wonderfully, but others do not.

No need to ‘fake’ placebos

The interesting take-away here, is that placebo effects are not simply “in your head” but trigger a real biological mechanism in the body. The power of expectation steeped in belief does not merely “fool” the patient into feeling something has change in them through wishful thinking; the body, led by the mind, creates a release of biological chemicals that reduces pain, elevates mood and heals.

After decades of research in this area, Harvard researcher Ted Kaptchuk, recently presented a lecture here that spoke to the placebo effect, calling it “honest fakery.”

In his research Kaptchuck discovered that placebos work as well as or better than prescription drugs and surgery. More striking, he has found that even when doctors tell their patients they are giving them a placebo, the placebo still works! In other words, there is no need to deceive in blind trials, because, even when knowingly taking placebo, patients still feel real results.

Placebos work because the patient believes in the treatment enough that the their body responds as if taking a real drug or undergoing a real surgery… even when the drug is a sugar pill or the surgery is sham (an incision is made but nothing further is done.) Add to this a belief in the efficacy or strength of the drug or procedure put forth by a doctor in a white lab coat, and you have the makings of a very strong placebo effect.

But now, the research shows that when the doctor tells the patient they are being given a placebo and it works for many people, the patients still have the effect. In other words, placebo responses can also be learned and, according to the research, over time the body is in control and it doesn’t matter what the mind thinks.

Kaptchuck recounts that “historically, the assumption has been that deception or concealment is necessary for placebos to work.” But he wanted to do a study that turned this idea on its head. And it worked for IBS patients and chronic low back pain patients. Telling a randomized selection of the group to take a placebo twice daily along with their treatment. Nearly 60% of the open-placebo group reported improvements, compared to 35% of non-placebo group.

The new research on placebos, and especially the research on open placebos (telling the patients they are taking a placebo), is astounding. This means that, at a minimum, 30% of patients can take a hidden placebo (a placebo acting as the real thing) and receive positive results, and further, that nearly 60% of people respond well to an open-placebo.

And so it leaves one perplexed… wondering, with results like these, why the government and mainstream medicine would continue to put down and diminish placebos and treatments that, as it turns out, are actually placebos (like homeopathies). Are these a “sham?”

Maybe, but I don’t believe they are a “scam.” Instead, they seem to reinforce the true power of belief and positive expectation on our body’s innate ability to heal itself. It shows us that the mind is very powerful in healing us and also keeping us ill with statement like “nothing works for me.”

Most importantly, it shows that 30-60% of the time we do not need potentially toxic prescription pain killers or needless surgeries to get well or feel better.

Perhaps there shouldn’t be a rush to a judgment diminishing treatments that harness the power of the mind/body connection.