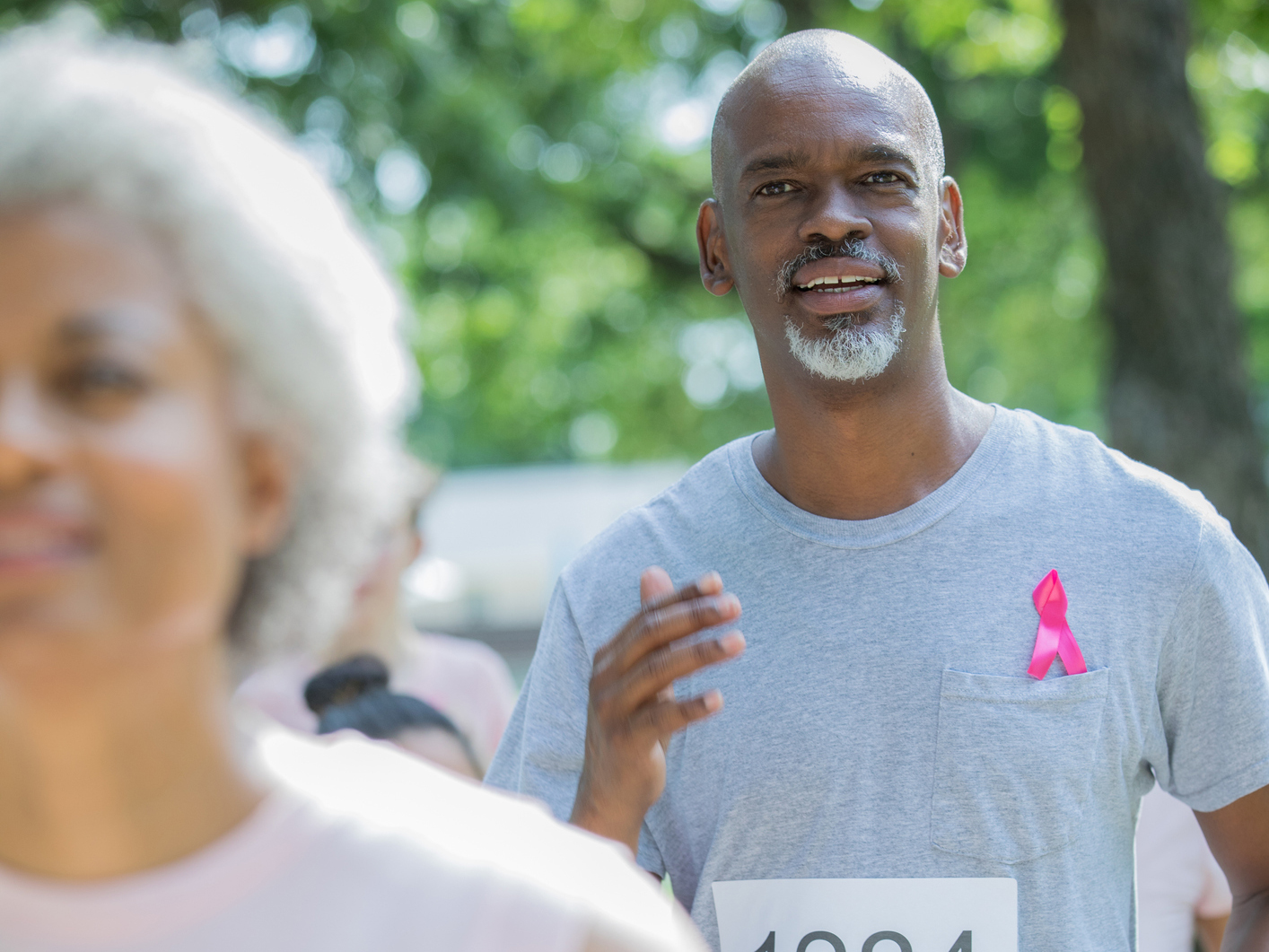 According to statistics from the National Breast Cancer Foundation, two things will happen in the coming year:

But percentage-wise — 19 percent vs 16 percent — diagnosed men are more likely to die than women, partly because little light is shed on the disease in men.

And frankly, the numbers are probably higher, since many men either don’t know they can get breast cancer or have been diagnosed and are embarrassed at having a “women’s disease.”

Breast cancer is breast cancer, folks, regardless of gender. It operates pretty much the same way and can kill anyone, male or female.

But men can also be survivors, provided they know the signs, take action, and don’t let stigma stop them from saving their own lives.

Men have breasts, too

You may never have even considered the fact that men, too, can get breast cancer.

Until puberty (age 9 to 10 on average), both boys and girls have a small amount of breast tissue. It consists of a few ducts located under the nipple and areola (the area around the nipple).

At puberty, a girl’s ovaries make female hormones that cause those ducts to grow. Boys, on the other hand, have low levels of the female hormone, so their breast tissue doesn’t grow much.

For both genders, most breast cancers begin in the ducts that carry milk to the nipple. Men have these ducts, too, although they are not functional.

Despite the many similarities, there are some important differences between men and women that make early detection of breast cancer difficult in men.

The most obvious difference is breast size, which is both a plus and a minus when it comes to early detection.

Because men have very little breast tissue, it is easier to feel small masses or tumors.

On the other hand, this small size means that cancers do not need to grow very far before they reach the nipple, the outer skin of the breast, or the muscles underneath.

Therefore, although most breast cancers in men are smaller than in women, many of them have already spread to nearby tissues and lymph nodes by the time they’re detected.

The other factor affecting detection in men is lack of awareness and the stigma many men associate with having male breast cancer.

So many men think they just can’t get breast cancer, period. They ignore lumps or changes, or think they must be an infection or something else, but definitely not cancer.

Therefore, they don’t seek medical attention until the mass has already had a chance to grow and possibly spread.

Some men are embarrassed to find a lump and are afraid that a friend or family member might question their masculinity. Perhaps it makes them question it themselves.

Signs to look for

Here are some signs that you might have male breast cancer:

Although the cause of male breast cancer is unknown, certain things seem to increase a man’s risk.

Age.  On average, a man diagnosed with breast cancer is 72 years old.

Family history. As for women, having immediate relatives with a history of breast cancer increases risk.

Gene mutations. Defects in the BRCA2 or BRCA1 gene are at high risk. (We all have these genes. They don’t cause breast cancer, but mutations do increase risk).

Klinefelter syndrome. Men with this congenital condition (you’re born with it) have an extra Y chromosome and smaller testicles. They also have lower levels of androgens (male hormones) and more estrogen (female hormone), increasing their risk of breast cancer.

Testicular conditions. Having an undescended testicle, surgery for removal of a testicle, or an adult case of mumps can increase the risk of breast cancer, again most likely related to hormone levels.

Liver disease. The liver plays a role in balancing sex hormones. With cirrhosis, or whenever the liver is not functioning well, estrogen levels can rise.

Heavy drinking can damage your liver and cause those hormones to become imbalanced.

Men with liver disease also have a greater chance of developing gynecomastia, a benign breast growth.

How to save your life

The range of treatment options, and the work you will do with your doctor to determine your best course of action, really isn’t different from what a woman does when she discovers she has breast cancer.

What is different is how you may feel about your diagnosis.

Our best advice: don’t hide it. Talk to a trusted friend. Then see a medical professional who can tell you what to do next.

The sooner you act, the more likely it is that you will be a survival story and that life will continue with a renewed appreciation for all that you have.

For a good, comprehensive resource, check out the Male Breast Cancer Coalition