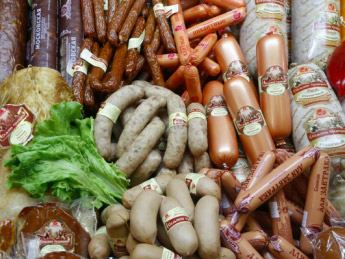 The World Health Organization (WHO) has made a groundbreaking, and potentially lifesaving, announcement concerning the link between eating meat and the development of cancer. Specifically, WHO researchers (the Working Group) concluded that eating 50 grams (1.8 oz) of processed meats such as bacon, hot dogs, beef jerky, and deli meats per day increases a person’s risk of developing colorectal cancer by 18 percent.

The researchers classified eating processed meats as “carcinogenic to humans” (Group 1), based on finding sufficient evidence for their causing colorectal cancer. A Group 1 classification places processed meat consumption in the same category as smoking and asbestos. In addition, the Working Group reported a positive association between eating processed meat and stomach cancer.

But it also looked at red meat and cancer in general

To a somewhat lesser but still important extent, the WHO report pointed out that red meat (unprocessed meats), such as beef burgers, lamb chops, and pork roast, are “probably carcinogenic to humans” (Group 2A). When looking at the risk of colorectal cancer in particular, the Working Group reported a 17 percent increased risk associated with 100 grams (3.5 oz) per day of red meat. If people chose to subject these meats to high temperatures such as when frying or barbequing, the risk of cancer may increase, although the authors explained that more research into this topic is needed.

We say “potentially lifesaving” because in order for these significant health warnings to have a positive impact, people need to heed them. It may help to know that these warnings and the recommendations stated in the report are based on the findings of more than 800 studies, which were reviewed by an international team of 22 scientists from ten countries. The studies themselves came from several continents and covered a broad spectrum of diets and ethnicities.

According to estimates by the Global Burden of Disease project, diets high in bacon, sausage, and other processed meats lead to nearly 35,000 deaths from cancer per year. When it comes to red, unprocessed meats, the Working Group noted that if further investigations prove that eating these foods causes cancer, then 50,000 deaths from cancer annually could be attributed to following such a diet.

This WHO report supports and advances the stance of the American Cancer Society, which encourages individuals to consume more vegetables and fish and less processed and red meats. The Society has based this recommendation on “a wealth of studies linking colon cancer to diets high in red meats (beef, lamb, or liver) and processed meats (hot dogs, bologna, etc.).”

What about meat and prostate cancer?

The figures associated with consuming processed and unprocessed meats and development of colorectal cancer are alarming. In fact, according to the American Cancer Society, colorectal cancer is the third leading cause of cancer-related deaths among men and women in the United States, with men being slightly more likely at risk than women. During 2015, an estimated 49,700 people are expected to succumb to the disease.

Although the WHO report did not focus on an association between consumption of processed meat and unprocessed red meat and prostate cancer, this relationship has been studied for many years. Research has explored the impact of the potentially harmful substances in meat (e.g., saturated fat, nitrates and nitrites, hormones) as well as the effect of various cooking methods.

Among those studies are the following:

The WHO report is an international wake-up call for everyone to recognize the cancer risks associated with eating processed meats and red meat in general. Yes, vegetarians get cancer too, but the evidence shows that global communities with the lowest meat consumption have the longest life-spans and the lowest cancer rates. Processed meats should definitely be off your shopping list, especially if you are reading this and are concerned about prostate cancer.