Home » When low testosterone is actually a simple vitamin problem 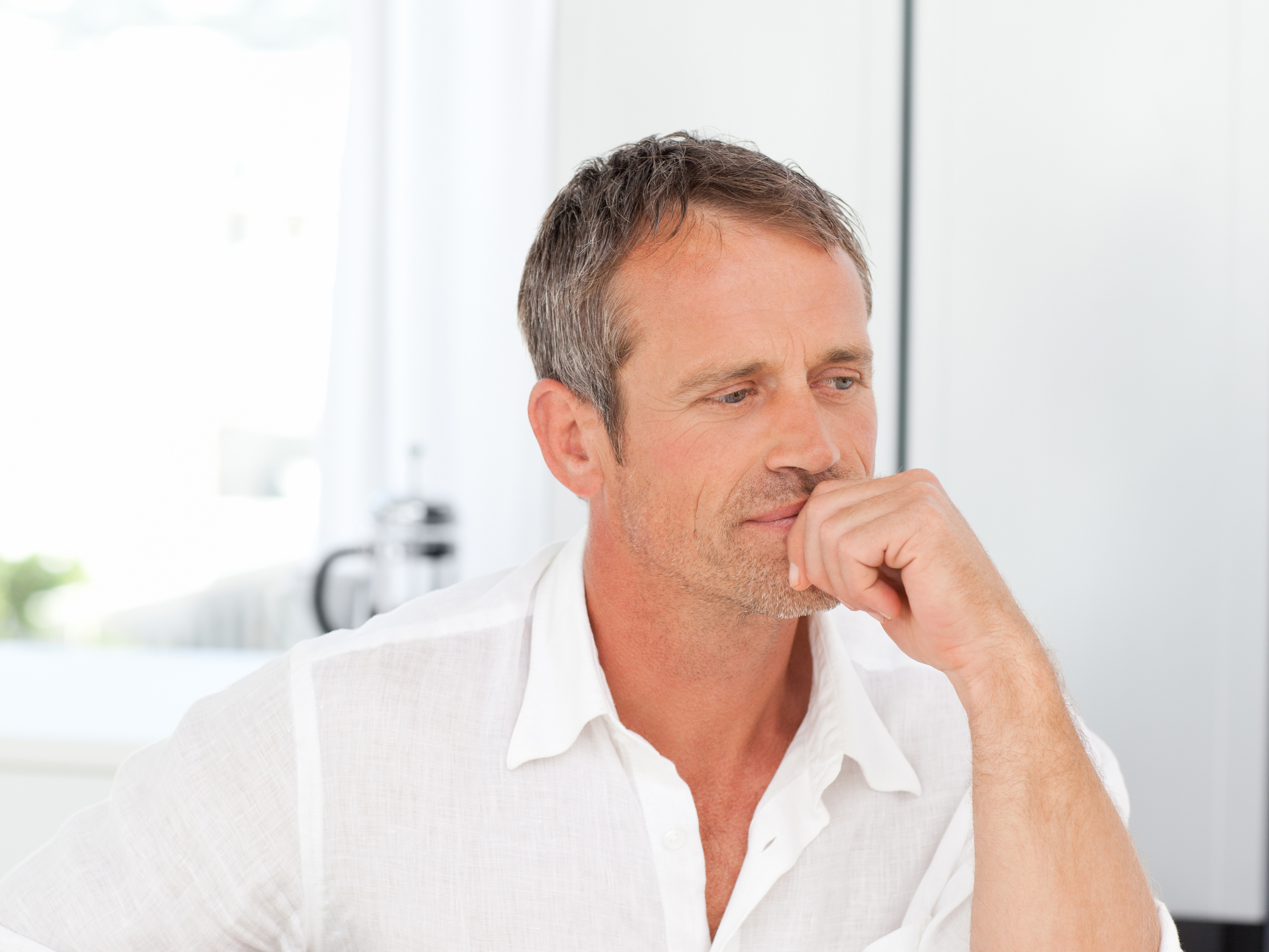 Vitamin D is one of the most researched and talked about nutrients, and well it should be. Why? One reason is its long arm of influence: It has an impact on numerous essential bodily functions and conditions. Scientists keep discovering more information about how this unique vitamin — which is the only one the body produces by exposing the skin to sunlight — can affect our health.

Another reason why this nutrient is a hot topic is that vitamin D deficiency is common which, given its critical role in overall health, is a big concern. I’m most interested in vitamin D for yet another reason: its involvement in increasing testosterone levels in men, as well as other general preventative health benefits.

Before I tackle the relationship between vitamin D and testosterone, I need to address several basics, which will clarify the bond between this vitamin and T.

Vitamin D: The basics behind the lost cure

Vitamin D is a fat-soluble vitamin, which means it is absorbed through the small intestine with dietary fat and is stored in body tissues.

The best way to get vitamin D is from skin exposure to sunlight. That’s when a fascinating transformation process begins. When ultraviolet B rays hit your skin, a type of cholesterol naturally found in the skin, called 7-dehydrocholesterol, absorbs the ultraviolet B rays and is converted to cholecalciferol, the pre-vitamin form of vitamin D3. Cholecalciferol is transported to your liver, where it is metabolized and transformed into hydroxyvitamin D, aka 25-hydroxyvitamin D or 25(OH)D. The kidneys then convert the 25(OH)D into dihydroxyvitamin D, aka 25(OH)2D, the form of vitamin D your body can use.

The required amount of “skin exposure” is different for different people, but generally, the body can produce 10,000 to 20,000 IU of vitamin D in the amount of time it takes for your skin to turn pink. You get the most bang for your buck when exposing a large area of unprotected skin (no sunscreen), such as your back, rather than just your face or arms. Factors such as time of day (best exposure time is between 10 AM and 3 PM), number of times per week of exposure (at least two to three times), skin type, where you live and age (older skin does not synthesize the vitamin well) also have an impact on the amount of vitamin D your body makes.

Vitamin D is also available from two other sources: diet and supplements. When you eat foods that contain vitamin D (e.g., fish such as salmon and herring, fortified beverages such as orange juice and non-dairy drinks, fortified cereals) or take vitamin D supplements, your gut sends the vitamin to your liver, where it is transformed into an active form. However, it’s not feasible to get all the vitamin D you need from food, so unless you are spending enough time outdoors year-round, you will likely need to take a vitamin D3 supplement.

What are normal levels of vitamin D?

If you think you may have a vitamin D deficiency, ask your doctor to check your vitamin D levels. This involves a simple blood test, which also can be ordered online through reputable laboratories. An optimum blood level of vitamin D, which will be displayed as 25(OH)D on your test results, is 50 ng/mL to 80 ng/mL, according to the Vitamin D Council and some other experts.

Personally, I advocate taking 5,000 IU+ daily (which is also endorsed by the Vitamin D Council). This figure is in dramatic contrast to the recommendation by the Food and Nutrition Board (the U.S. government), which is 600 IU for adults up to age 70 and 800 IU for older adults. If your vitamin D levels are very low, your doctor may prescribe a much higher dose for a short time (typically 50,000 IU) and then send you for another blood test to determine whether your dose should be adjusted.

According to the Mayo Clinic, you’d have to take 60,000 IU daily for several months to get anywhere near vitamin D toxicity.

Generally, people older than 50 need more vitamin D than do younger people. One reason is that as you age, your ability to convert ultraviolet rays to an active form of vitamin D declines, but your risk of BPH, type 2 diabetes, high blood pressure, serious prostate problems, and heart disease goes up. Aging men need to keep a sharp eye on their vitamin D levels and intake.

The short answer is yes. Several studies suggest vitamin D can increase testosterone concentrations in men. A German research team, for example, gave 54 overweight but otherwise healthy men either a placebo (23 men) or 3,333 IU vitamin D per day (31 men) for 12 months. When the men entered the study, they were vitamin D deficient (average of 30 nmol/L or 12 ng/mL). All the men also participated in a structured weight loss program.

At the end of 12 months, the men who took vitamin D showed an increase in levels to an average of 86 nmol/L (34.5 ng/mL). These same men also had a small but significant increase in mean testosterone levels as well:

The men who took a placebo didn’t show any significant changes in testosterone or vitamin D. Based on these findings, the authors concluded that vitamin D supplements might increase levels of testosterone.

More recently, researchers presented study results at the American Urological Association 2015 Annual Meeting explaining that low levels of vitamin D are significantly and independently associated with low levels of testosterone in healthy middle-aged men. They arrived at this conclusion after analyzing blood sample data from 824 men.

Exactly how vitamin D increases testosterone levels or why a vitamin D deficiency is associated with lower T is still a mystery. In fact, at the American Urological Association 2015 Annual Meeting, one of the presenters, Mary Ann McLaughlin, M.D., from the Mount Sinai Hospital in New York City, noted that earlier research in mice has shown that testosterone levels were lower in animals who had their vitamin D receptors genetically deleted. This, she said, “suggests that there is something about testosterone synthesis that needs vitamin D.” Exactly what that “something” is, is not yet known.

However, the researchers associated with the German study came up with several ideas about how vitamin D increases T levels based on their findings and those of other investigators.

Impact of vitamin D on estrogen levels in men

The impact of vitamin D on estrogen and men’s health occurs at several levels. For example, vitamin D is known as a signaling molecule, which means it plays a role in regulating various processes, such as calcium balance and bone health as well as male reproduction. Animal studies have shown that vitamin D is essential for estrogen signaling and ensuring sperm move efficiently.

The relationship between vitamin D, estrogen, and testosterone also is important.  In small amounts, male estrogen (estradiol) balances testosterone and plays a role in brain, bone, and sexual health. But when estradiol levels are elevated, as they often are in men who are overweight or obese, then there’s an imbalance between estradiol and testosterone, often resulting in weight and fat gain, muscle loss, reduced libido, and mood changes, and even an enlarged prostate and increased risk of cardiovascular disease. Improving one’s vitamin D levels can help with weight loss and reducing estradiol levels, thus moving the estradiol: testosterone ratio toward a balanced state.

Yet one more link between estrogen, vitamin D, and men’s health involves prostate cancer. Research done in cancer treatment and prevention has shown that receptor sites for estrogen and vitamin D work together to promote optimal health. At the same time, there’s evidence that men who have genetically damaged receptors for estrogen and vitamin D are more likely to develop prostate cancer.

Why vitamin D is important for weight management in men

If you are overweight, chances are your T levels are lower than normal. The good news is that dropping excess pounds and managing your weight can give your testosterone levels a significant boost.

In a study of nearly 900 overweight, middle-aged men who had prediabetes, about 50 percent of them with low T levels who lost weight by making dietary and exercise modifications saw a 15 percent rise in their testosterone levels. These men didn’t do anything extraordinary — they simply exercised 150 minutes per week and consumed less fat and fewer calories. Their rewards were higher T levels and 17 fewer pounds after one year.

Vitamin D may also help with your weight management efforts. Evidence of this benefit comes from a study of 400 overweight and obese individuals who also were vitamin D deficient. All of them were placed on a low-calorie diet for six months, but two-thirds of them also took either 25,000 IU or 100,000 IU per month of vitamin D supplements.

At the end of six months, the people who had taken vitamin D had lost more weight and had a greater decrease in their waist size than people who had not taken the supplements.

Another example of a relationship between vitamin D and weight was presented at the American Urological Association 2015 Annual Meeting. Experts explained that men who have low vitamin D levels also tend to have a greater body mass index and a larger waist circumference than men whose vitamin D levels are normal.

So keeping vitamin D levels in a healthful range could be a win-win-win situation: weight loss plus a boost in testosterone levels and better overall health.

Other health benefits of vitamin D for men

I’ve already talked about the importance of vitamin D in increasing testosterone levels, but that’s not the end of the health benefits of vitamin D in men. Whether you want sustained strength in the gym and on the road, more brainpower in the boardroom, better performance in the bedroom, or other overall health benefits, you need to keep your vitamin D levels at optimal levels.

Firstly get tested and know your personal levels. Aim for 50 ng/mL to 80 ng/mL. Take to your doctor about taking a super-dose of vitamin D (50,000 IU’s) for a short period if you are below 50 ng/mL – and then going on a maintenance dose of ~5000 IU a day. You may want to also consider a general testosterone support supplement for overall daily health. Vitamin D has so many proven health benefits it’s one vitamin that I consider essential for improving men’s health.