Home » How close are we to a real anti-aging pill?

A patient of mine was excited this past week to tell me that rapamycin and metformin were the two hot topics at a recent anti-aging conference in Las Vegas.

And I have to admit, I’d been hearing and reading quite a lot about these two drugs and their potential to lengthen lifespan.

I’d like to share what I’ve learned about rapamycin from the scientific literature and what’s been reported about its usefulness to fight aging, cancer, and neurological disease. I’ll take up metformin in a separate report.

Rapamycin and its cousin medicines (“rapalogs”) are currently prescription medications for organ transplant recipients and also cancer patients with the names of sirolimus (Rapamune), deforolimus (Ridaforolimus), everolimus, and temsirolimus (a rapamycin pro-drug).

But there is an indication that used “off label” it could be an anti-aging breakthrough.

When a drug is used off label, it means a physician has prescribed it for an approved use other than what it was developed for. For example, Wellbutrin is a brand drug developed for depression, but over the years it’s been found to aid smokers in quitting and work as a second-line treatment for ADHD.

How did Rapamycin get a reputation as an anti-aging drug? It was first discovered from a soil sample on Easter Island (Rapa Nui). This antifungal metabolite of Streptomyces hygroscopicus was subsequently found to have immunosuppressive and anti-proliferative properties in animal studies. Now years later, the mode of action of rapamycin has been identified in great detail and is proven to be anti-aging drug and a lot more.

Rapamycin and the rapalogs have been used in healthy volunteers, and even in pregnant women without detrimental effects. They have minimal side effects — which can be reversed by discontinuation of the drug.

Rapamycin and the rapalogs are well proven to have the following impressive health effects (and I have 88 scientific studies for this section — too numerous to cite):

After many years of research and animal studies, rapamycin was recently investigated as an anti-aging drug in a small human clinical trial.

Mechanism of action of Rapamycin

The molecular mechanisms of action that have been well studied are quite complex. I feel you deserve to know just a few of the key abbreviations that may become more popular in years to come: 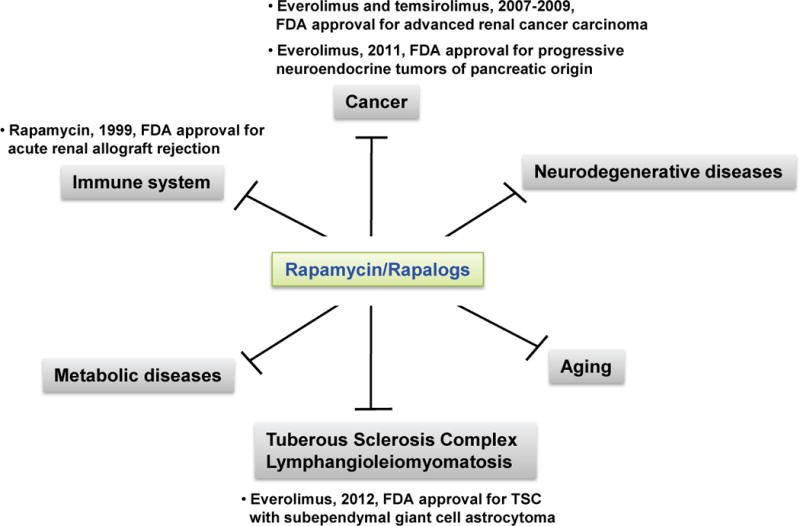 Now after 10+ years of intense research on rapamycin, mTOR, and mTORC1, the direction of this research continues to be the implementation of anti-aging drugs that can delay age-related diseases.

The dilemma is that we don’t have long-term studies yet for the FDA to give their approval, though it’s certainly been demonstrated to be safe in many medical situations.

There’s nothing holding you back from working on the latter two. And it may not be too far down the road that off-label use for rapamycin could include a common anti-aging pill.

To healing naturally whenever we can,


Editor’s note: Diseases of aging have a common factor: a dysfunctional master hormone you’ve heard of as insulin. Multiple chronic conditions, including cancer, can be triggered when the master metabolic  control hormone goes haywire. Click here for a preview of The Insulin Factor!