Home » What do blood sugar, Alzheimer’s and cancer have in common? 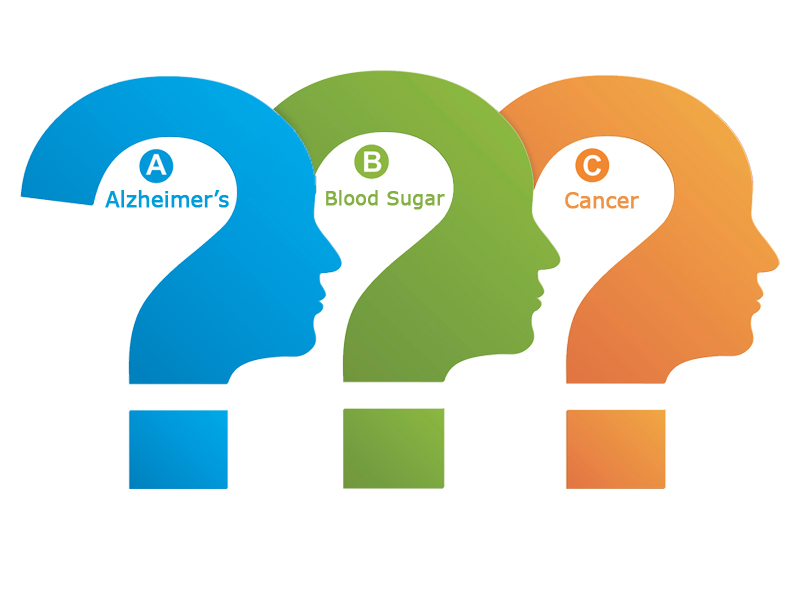 What’s not as widely-known is the connection between diabetes and cancer. Even if you just have pre-diabetes, an elevated blood sugar condition that precedes type 2 diabetes, you’re 15 percent more likely to develop breast, lung, colorectal, uterine and prostate cancers.

The question is… why are these diseases so interconnected? Well, research shows it may all come down to insulin resistance…

Insulin resistance and your brain

Insulin is also critical to the parts of your brain responsible for learning and memory, which means a problem with insulin could lead to bigger problems with your brain health down the road.

The latest study from researchers at Tel Aviv University, for example — which monitored the health of 500 people for over 20 years — found that people with the highest levels of insulin resistance were more likely to develop cognitive impairment and more likely to see their cognitive abilities decline quickly. And tests at the Washington University School of Medicine in St. Louis explain why Alzheimer’s is becoming known as type 3 diabetes…

They demonstrated that when levels of glucose in the blood climb, it can accelerate the development of amyloid beta in the brain. Amyloid beta is the type of plaque that disrupts memory and drives the destructive processes of Alzheimer’s.

Dr. Isaac Eliaz, EHO medical contributor explains it this way… “Progressive insulin dysfunction and related metabolic and inflammatory problems in the brain have been observed in patients with various stages of Alzheimer’s disease. Essentially, insulin dysfunction in the brain starves neurons of energy — and fuels other features of dementia such as brain cell death, DNA damage, inflammation, harmful genetic signaling and the formation of plaques in the brain, characteristic of Alzheimer’s disease.”

A colleague I worked with just a couple of years ago, Carl Lowe, wrote about the diabetes-cancer connection, and he cited compelling evidence from a meta-analysis — a type of research where evidence is gathered from multiple studies on the same subject.

In total, 16 studies were incorporated into this particular analysis, and examined this blood sugar/cancer phenomenon around the world, including countries such as Asia, the United States, Europe and Africa.

And for all of these people, the findings were definitive… elevated blood sugar can lead to cancer.

The scientists pointed out that the increase in cancer in people with pre-diabetes may be caused by the fact that having continual high blood sugar leads to a state of what’s called “chronic oxidative stress” in the body.

That means that a harmful substance known as free radicals accumulates and causes damage to cells and cell membranes. In addition, elevated blood sugar can lead to an excess level of advanced glycated endproducts — these are toxic substances known to cause cancer (and premature aging).

But ultimately the scariest thing about this phenomenon is that in the U.S. alone, 86 million of us, aged 20 and older, have prediabetes. In 2010 that number was closer to 79 million. So as this number rises, you can bet the number of Americans diagnosed with cancer in the coming years will too.

How to keep from being one of them

Odds are the answer to both of these questions is a resounding “no.” I know I use this term a lot, but the mainstream doctors — the ones who stick to the old ways — are missing the boat here. They only factor insulin into disease when it’s obvious — diabetes. But thanks to people who think outside of the box, and the research that’s coming to light, we now know the damage of insulin resistance goes much further.

In fact, many integrative physicians believe not only does insulin resistance lead to disease, but that getting a grip on this one health issue can keep your body disease-free.

Dr. Ron Rosedale, one such doctor, pioneered research into the insulin factor, disclosing some eye-opening information about centenarians in the early 80s. These studies were searching for the variable (or variables) that could be acknowledged as the key reason that some of these extreme seniors were not just living to 100, but had been able to maintain reasonably good health into their advanced age.

What was discovered was that these folks had very little in common with one another — but for one thing: the centenarians in the studies had insulin levels that were balanced and under control.

We go a step further in our book, The Insulin Factor, to say that conventional medicine’s narrow view of insulin is the biggest medical mistake ever — because pigeonholing this master hormone into one disease (diabetes) puts your overall health at greater risk and could shorten your life span.

Now, there are many steps you can take to drastically improve your insulin resistance so you can have balanced levels. The most obvious, for starters, is changing your diet. Merely cutting out high-glycemic foods, like grains, can slow or stop erratic spikes in blood sugar that prep you for full-blown insulin resistance.

The paleo diet, which I follow, eschews grains and starchy vegetables that can cause the blood sugar imbalances that lead to insulin resistance.

Dr. Michael Cutler has also outlined a long list of herbs and supplements that can help reverse insulin resistance. Check out his post on treating insulin resistance and metabolic syndrome, so you can restore healthy insulin function to preserve your brain health and decrease your cancer risk before it’s too late.