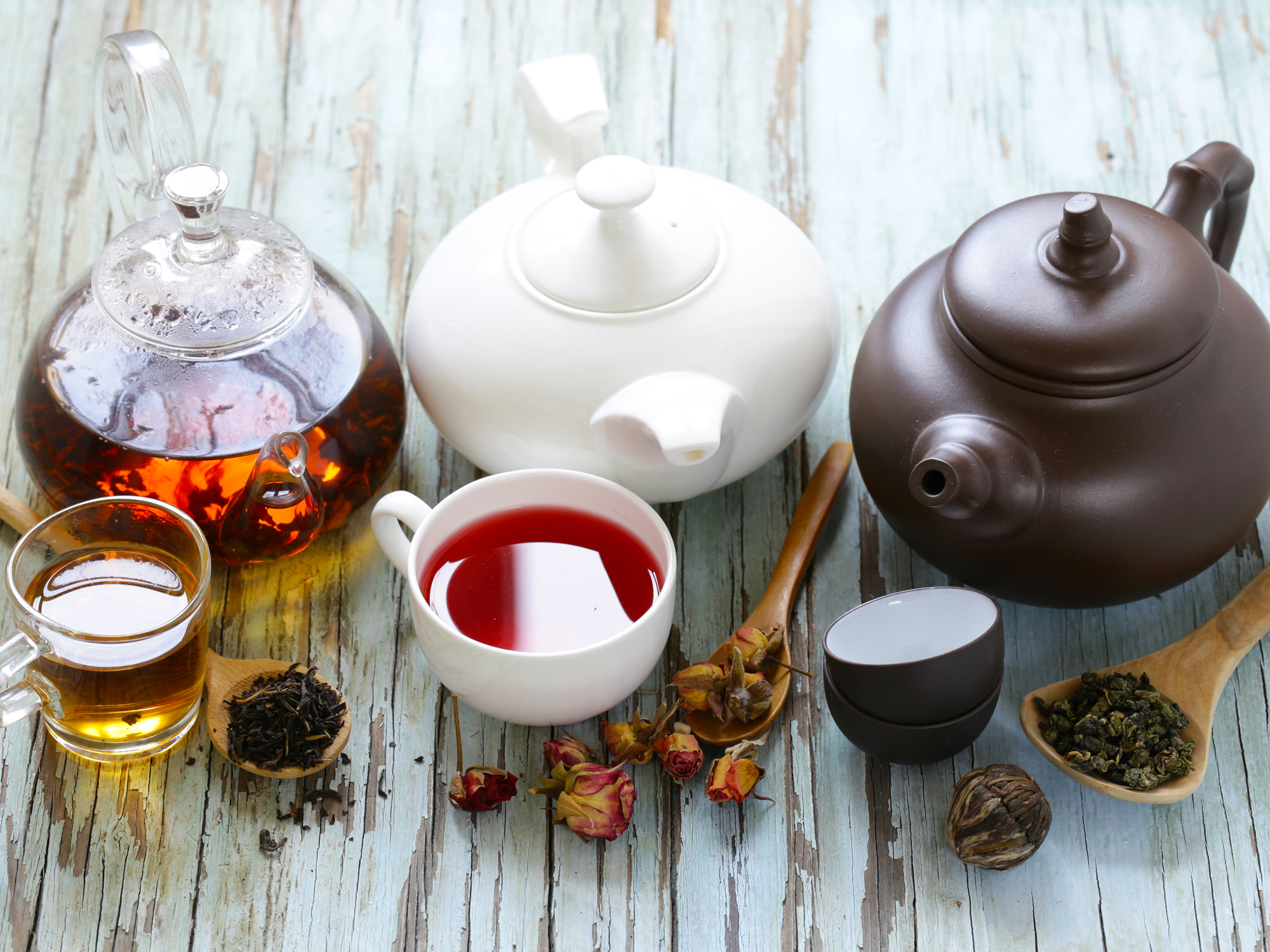 Reports vary as to whether tea or coffee is the more popular drink. Depending on who you talk to, one or the other of these hot beverages is their favorite.

The health benefits of coffee have been talked up a lot lately. It seems that risk for heart disease, Parkinson’s disease and diabetes can be lowered by some java.

When I was a kid, though, it was a tall glass of tea and honey that made an appearance whenever I was sick.

True tea is a beverage that comes from the tea plant. But herbal teas in their endless varieties are made by soaking leaves, flowers or spices in hot water. Herbal teas are also called ‘tisanes,’ or infusions from a plant other than the tea plant.

The leaf, flower, root, bark, fruit or seed of a plant can be used to make herbal ‘tea.’ These drinks have a wide variety of medicinal and health uses. As an added benefit, they’re typically caffeine-free.

Here’s a partial list of tisanes that are aromatic and pleasant and have definite benefits for your health. Have some fun trying them to see which is to your taste—and which provides the best benefits suited to your health needs…

Also called redbush tea, caffeine-free rooibos tea comes from a plant native to South Africa. Research has shown that it reduces inflammation, prevents oxidative stress, and may even act directly against cancer cells. Rooibos has a naturally sweet hint to it, and is just as good cooled, as in this cherry lime rooibos tea cooler recipe.

A seven-year study of Mexican-American women linked this fragrant tea with 29% lower odds of dying during the research period.

Chamomile flower tea has been used by many cultures for a variety of health benefits, including lowering cholesterol, preventing blood clots and controlling blood sugar.

Most people nowadays know chamomile tea to be a good choice for a calming drink just before bed. And without it, I don’t think I would have survived losing an hour to the time change over the weekend.

Related: The ancient herbal tea that induces sleep and a longer life

Some research points to rose hips as a potent reliever of arthritis pain. What we do know about this tea that’s made from the seed pods of wild rose is that it is rich in Vitamin C and antioxidants.

You don’t need to have an upset stomach or headache to enjoy this cooling drink. Many people drink it regularly to keep nasal passages clear, and just enjoy its flavor.

Peppermint is also known to boost memory and mental alertness, so having a cup at your desk during the day might help!

Made from ginger root, this tea is mainly used to relieve upset stomach, nausea and flatulence as well as to calm coughs.

Gingerol is a compound that reduces inflammation. Studies have begun to look at gingerol’s potential for fighting rheumatoid arthritis.

There is evidence that lemon balm tea can act as a sleep aid and can help relieve anxiety in general. It gives some people stomach aches and nausea, so start slow with this one.

Silymarin, a flavonoid with anti-inflammatory powers, is the main natural compound in the milk thistle plant — an all-in-one superherb. Silymarin has been proven to protect the liver against the damaging effects of long-term use of some drugs, particularly acetaminophen.

In Traditional Chinese medicine, hibiscus tea is used to fight cold and flu viruses, as well as congestion, due to its rich Vitamin C content.

In addition, hibiscus tea seems to have one unique but potentially important ability…

In 2016, just after the last major outbreak of bird flu in the United States, a study published in the Journal of Veterinary Medical Science compared the anti-viral properties of a dozen different herbal teas. Hibiscus was the only tea that reduced the bird flu virus and stopped it from replicating.

Native American, Chinese and Arab medical traditions have all used dandelion to help with liver and gall bladder problems.

The pesky yellow flower that shows up in our backyard is actually full of Vitamins A, B, C, and D, as well as iron, potassium and zinc. It’s known as a diuretic, which means it helps the body get rid of excess fluid, relieving belly bloat.

Dandelion tea can be made by steeping the flowers in boiling water for about 30 minutes. Just make sure you’ve picked them from an area that isn’t treated with chemicals of any kind.

When trying herbal teas for the first time, it’s always a good idea to consult with your doctor. Many herbs can cause unexpected reactions.

For example, even calming chamomile could cause you problems if you’re allergic to other flowers in the same family, which include ragweed, daisies and chrysanthemums.

The high Vitamin C content of rosehip tea could be a concern for people with kidney stones or diabetes.

If you are taking any medications, you should absolutely check with your doctor before indulging in herbal teas. Many herbs have known drug interactions.

And, if you’re pregnant or nursing, always check on whether an herb is safe for you to consume.

Once you get the all clear, you can enjoy trying these healthy teas, hot or cold, in any season!