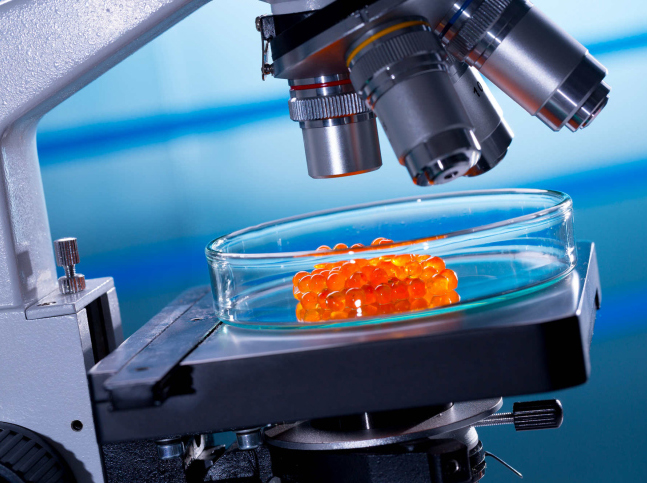 A new organism that has never before appeared on planet earth is about to hit your dinner table… but you’ll never know. Because no one has to tell you that you’re eating it.

After years in the making, the FDA has recently given the go-ahead to AquaBounty Technologies to unleash the first ever approved “GM animal”— a salmon that grows to market size in half the time the unadulterated natural fish normally would — thanks to a growth hormone gene that has been spliced into the fish’s DNA.

The government says it’s safe, but isn’t it reasonable to be concerned that either they — or us after we eat them — might be vulnerable to existing or even new strains of bacteria, allergens, and toxins that might evolve along with the new fish?

Now that these fish will be out there, they can’t be “recalled” like other foods. That’s it. They’re unleashed on the world — though quite a lot of people, including more than 300 environmental , consumer, health and animal welfare organizations , as well as and the Center for Food Safety (CFS), were vehemently opposed to the idea of it making its way onto your table.

But not the U.S. Food and Drug Administration (FDA).

And the worst part? You don’t even have the right to know whether you are eating it or not. That’s because, like GMO foods already available in your supermarket and hidden in most processed foods, sellers of GE salmon won’t be required to add labeling to help you avoid it.

The use of growth hormones in animals is nothing new. Nor are the concerns over their effects on our health.

As early as the 1930s scientists were working with the food industry, first using hormones to make cows produce more milk. Then on into the 1950s, hormones helped make bigger cows and chickens to feed more people on the cheap.

Though studies so far do not provide solid evidence to state that the addition of hormones in meat or dairy products cause any human health effects, according to information found at envirocancer.cornell.edu, many researchers feel there is a strong connection.

For starters, girls have been entering puberty at a much earlier age in the last couple of decades. This is especially concerning because early puberty in girls has been found to be associated with a higher risk for breast cancer. [1]

Dr. Stanley Korneman, an endocrinologist at the University of California, Los Angeles says that environmental exposure to estrogens in plastics, chemicals — and foods — has been going up and that estrogens stimulate breast development. This could be the link to early onset of puberty, and breast enlargement in young boys as well.

While GE salmon are not injected with hormones, as has been the usual mode of delivery for farm animals, there’s no way to know that the genetically-engineered growth hormone won’t present the same potential for harm. Especially depending on the amount of IGF-1 that may be present in the salmon.

IGF-1 is a protein known as insulin-dependent growth factor-1. People who have elevated levels appear to have a higher risk for cancers.

Higher levels of IGF-1 in blood have been found in women with breast cancer compared to women without breast cancer in the Harvard-based Nurses’ Health Study.  GE salmon were tested for IGF-1 levels, but there are claims that the developer used ‘insensitive’ testing methods that may have been faulty.

And he’s not the only one concerned. Jeffrey Smith, Executive Director of the Institute for Responsible Technology, shared in an interview with Sputniknews.com that scientists worldwide have rejected the safety testing protocols used by AquaBounty Technologies as superficial and reckless.

Obviously getting GE salmon to market quicker is going to be a big money maker for an industry that has proven it cares little about the effects of GE food on your health or the environment.

The bottom line here, I believe, is to follow your good sense. Even among health practitioners of different modalities, most agree that processed and GM foods carry risks. A fish that’s been engineered certainly can’t be considered a natural whole food — the best kind of food for your health.

Whole foods are nutrient-rich. Wild sockeye salmon is high in essential nutrients like omega-3 fatty acids. It’s been reported that GE salmon have lower levels of omega-3s and B12, but higher levels of contamination like other farm-raised fish. [3]

Environmental activist have raised alarms about the possible danger to natural fish populations. Though AquaBounty Technologies claim GE salmon to be sterile, the FDA has forbidden the breeding of AquAdvantage salmon on US territory, saying that it can only be raised in hatchery tanks located either in Canada or Panama.

With a caveat like that, it sounds like there could be some doubt even at the FDA. Perhaps they’ve read the research [4] by Canadian scientists who discovered that GE Atlantic salmon can cross-breed with wild brown trout, and pass on the extra genes for quick growth to the offspring. Would this result in wild populations of large, less nutritious mutant salmon?

Who’s to say. There are too many things we just don’t know about the world’s first ever GE animal as a food source. But while we may not have control over its possible environmental impact, you can try to avoid letting it sneak onto your dinner table.

One thing you can do is follow sustainable fishing advice, and opt for wild Alaskan Salmon. Also consider shopping at stores that have pledged not to sell GE salmon, like Costco, Whole Foods, Trader Joe’s, Target and Kroger.

By approving GE salmon, the FDA has taken our growing concerns over the known dangers of GMO crops — which include cancer, Autism and more — and upped the ante by approving for our consumption, an animal whose DNA has been altered. What’s next?